Housing affordability is one of the key factors that contribute to New Zealand’s cost-of-living crisis. The high cost of housing is also one driver of New Zealander’s high level of private indebtedness and an issue of intergenerational equality.

The Initiative’s research into housing affordability takes a different approach to the usual proposals of either just freeing up land and dropping regulations or compelling a reluctant population to live in high-density estates.

Instead, our research focuses on the context in which development takes place: local government. We examine the link between local government finance, and the incentives for local councils to develop land for housing.

There is a missing link between discussions of housing affordability (or rather a lack thereof) and finding workable financing management that allows local government to fund required infrastructure upgrades. We propose to close this gap with our research project examining international best practice.

Political decision-making in New Zealand is among the world’s most centralised. This is not necessarily a problem, but poor incentives combined with little local power can lead to weak local government performance. Local government has jurisdiction over a relatively small range of activities. At the same time, it is subject to expensive central regulatory mandates.

Our research investigates the role of local government in both New Zealand and abroad. What helps local government work well? How can appropriate incentive structures align council interests with those of the country? Can local governments encourage growth rather than constantly be at loggerheads with central government over the pace of consenting?

Our flagship publications on local government and housing include:

Our political successes in this field include the introduction of infrastructure bonds for residential development under the previous National Government, which the current coalition Government is continuing. We are also proud of having introduced the concept of localism into New Zealand’s political debates. 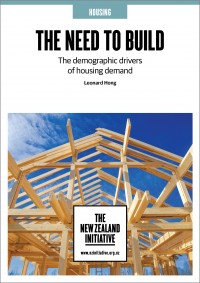 The Initiative normally focuses on national-level policy. However, we are based in Wellington. Read more

This submission in response to the Commerce Commission’s (Commission) Residential Building Supplies Market Study Preliminary Issues Paperi is made by The New Zealand Initiative (the Initiative), a think tank supported primarily by major New Zealand businesses. In combination, our members employ more than 150,000 people. Read more

The Initiative welcomes the government’s decision to reform the planning system. The Resource Management Act (RMA) has been disastrous. Read more

Pressure to intervene in the rental market is growing. The government’s new housing package, announced in March of this year, will increase rents and reduce the supply of rental accommodation to the detriment of many. Read more

Is opposition to a hospital a sign of insanity in planning laws?

In Douglas Adams’s classic Hitchhiker’s Guide to the Galaxy series, Wonko the Sane realised that the world had gone mad. He had seen the instructions on the side of a packet of toothpicks. Read more

In 2010, the National-led government launched a rather substantial experiment. Auckland City’s smaller councils were forced to amalgamate into a supercity structure. Read more

Oliver Hartwich talks about the work of The New Zealand Initiative

Oliver Hartwich talks to Rachel Smalley, Today FM about the greatest challenge facing New Zealand. He explains the work of The New Zealand Initiative and highlights it's research on public policy issues across the spectrum from local government, housing, planning and education. Read more

As an exemplar of the purest form of Kiwi anti-growth, anti-development orientation, it is hard to beat. If New Zealand doesn’t beat this particular habit, it is very hard to be optimistic about anything other than emigration. Read more

On 4 June, The Dominion Post published a lengthy and disturbing article highlighting the woes and dilemmas of earthquake safety regulation in Wellington. It highlighted the arbitrariness of current building standards and decisions. Read more