Reports & Media > Reports > In the Zone: Creating a Toolbox for Regional Prosperity

In the Zone: Creating a Toolbox for Regional Prosperity

Unfortunately, policy-making does not happen like this. Instead, we have a system which tends to deliver the very opposite: anodyne, nationwide-mandated policy reform that suits the need of at least a few regions with the least complaint from any of them.

But why is this? Allowing a more regional take on policy reform would not only let cities and regions find the policy solutions that work for them, but it would also make it easier to tell which ideas work so that other regions might try out good ideas too. Many potentially good policy ideas languish either because they seem promising but politically risky, or because while they might work well in one part of the country, it is far less clear that they would be a good idea elsewhere. Either way, regionalised policy trials in special policy zones could be the solution.

The one-size-fits-all settings, applied across urban and rural New Zealand, mean policy rarely suits local needs. Auckland’s housing issues are unique to Auckland. Rural areas need to balance economic development against environmental considerations. A Resource Management Act that has to cover both urban and rural development does a poor job of both – almost by definition.

Worse, because changes affect the whole country, Parliament is understandably reluctant to try out policies that sound promising and enjoy support in some regions, but are risky. And, even worse, when policy changes are rolled out, our national-level policy settings make it difficult to tell which policies are effective. If the government changed the Overseas Investment Act for the whole country, would changes in outcomes be due to the change in the rules, or changes in international conditions?

New Zealand’s unitary state provides little room for policy innovation across territorial authorities. We have one of the world’s most centralised forms of government. But, a federalist system where different provinces set their own legislation might be overkill in a country already smaller in population than half of all American states.

Fortunately, there’s a better way: regionalised policy reform zones. We argue that New Zealand should consider a more localised approach to policy-making, changing policy for regions that ask for it, and need it, but not in others.

Special economic zones would pilot policy reforms, building in evaluation and refinement from the outset. For example, RMA reform targeted at Auckland housing, and restricted to the Auckland region, could track housing affordability as well as other measures like GDP growth, employment levels, and even residents’

happiness over the trial period. If the reform shows improvement, other urban areas might want to make the switch. If not, the trial period can end and Auckland can return to the current rules.

Trying policies in limited areas and assessing whether they work would allow New Zealand to harness the advantages of federalism in encouraging policy innovation, but within a unitary state.

Why might councils want to test policies that would let them go for growth? We propose giving councils a bigger stake in economic growth.

Currently, central government reaps most of the tax increases that result from economic growth, with costs all too often left for local bodies to deal with.

Inland Revenue could track the total amount of tax collected from individuals and firms within each district council. A growing region sending more revenue to central government could receive a portion of that increase.

Councils’ sharing in the benefits of growth changes the game.

Too often, rates revenues from new developments barely cover the infrastructure costs councils bear, leaving little room for councils to help defray the costs growth might impose on neighbours. And so neighbourhood opposition to new development can stymie growth – opposition that could be turned around if council had financial room to strike the right balance, and incentive to do so.

But different places have different needs. The policy and regulatory barriers hindering economic growth differ across the country. When local councils have a strong stake in economic growth, they are the ones best placed to identify the changes that would help them to grow in the ways that are right for them. Perhaps the greater Wellington area could do well with simplified Overseas Investment Act (OIA) approvals – or, as an urban region without iconic high country estates, with an exemption from the OIA during a trial period. Auckland and the west coast could trial different variants on the RMA, one focused on enabling affordable housing and the other targeted at encouraging sustainable mining.

But those are just our ideas that we think local councils should consider. Councils will be able to identify barriers to their own growth that neither we, nor the Wellington bureaucracy, have thought of – if the game is changed to allow it.

Trialing policy at the local level, in response to local needs, lets the country find out which policies are effective, roll out successful policies more broadly for the regions that want it, and abandon at lower cost policies that do not work. And it could just be what New Zealand needs to bolster its flagging productivity growth. It is an experiment worth trying. 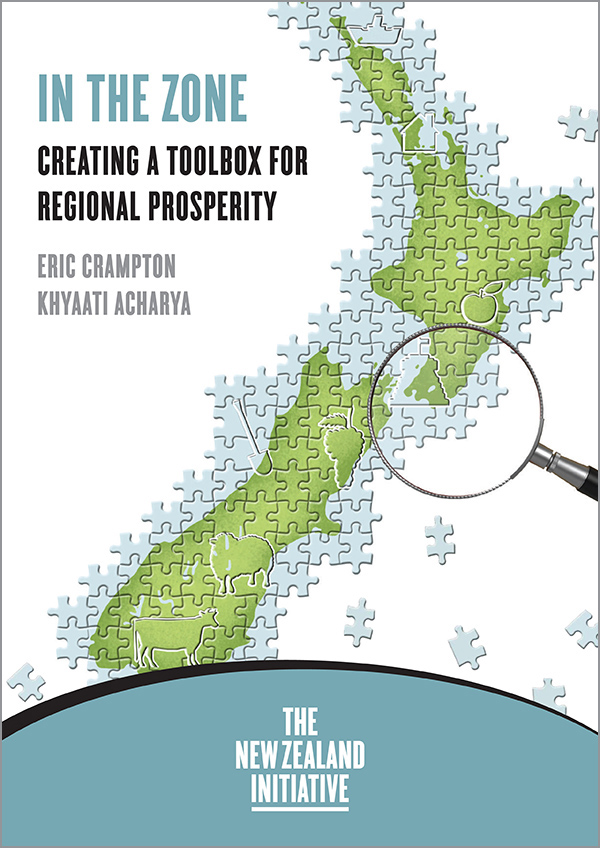 Khyaati Acharya on In the Zone: Creating a toolbox for regional prosperity

In the Zone Panel Discussion

In the Zone panel discussion