The Initiative welcomes the government’s decision to reform the planning system. The Resource Management Act (RMA) has been disastrous. We acknowledge the magnitude of the task that ministers, MPs and officials have taken on with these reforms. We welcome the opportunity to assist.

Given the size, complexity and significance of the planning system, if the reforms are to endure they should be based on:

Unfortunately, there is little evidence of these foundations in the exposure draft or the Parliamentary paper on the bill. The bill’s scope is so broad as to threaten uncertainty about what activities are legal.

We believe the key issue for the reforms is housing affordability because:

New Zealand’s housing market is among the worst-performing in the world. Since 1991, the year the RMA passed, real house prices have increased by more than any OECD country. House prices have risen by 30% in the last year. Between December 2019 and March 2021, the net worth of home owners increased $231,000, mostly the result of rising house prices. These staggering outcomes represent vast wealth redistributions and threaten to exclude untold numbers of people from ever owning a home.

The government must come to a view on the core functions of a planning system. In our view, planning’s core functions are a) to protect infrastructure corridors to support future growth, and b) to protect urban amenity by separating incompatible land uses (e.g. separate factories from homes).

The goal of the reforms should be a planning system which delivers those core functions without creating the artificial scarcity of serviced land which has led to the housing affordability crisis. 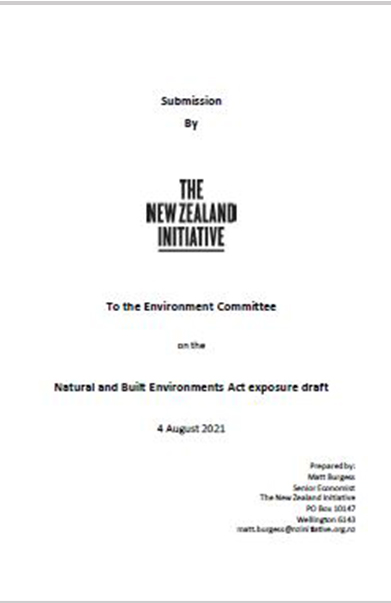 Submission: Ensuring our energy and airports regulation is fit for purpose

RMA to be replaced by three new laws

The wrong direction for RMA reform