New Zealand could be a leader in global emissions reduction. We could lower global emissions by far more than we contribute. We could achieve net zero emissions sooner than 2050. We must simply be prepared to do what works by partnering with or funding the best sources of emissions reduction and removals wherever they are in the world. That might be re-planting the Amazon, capturing carbon in British Colombia, building solar farms in outback Australia, or planting trees in Northland. Lower emissions depend on the effectiveness and integrity of emissions schemes, not their location.

But New Zealand is about close the door on global leadership. The Climate Change Response (Zero Carbon) Amendment Bill, the framework for New Zealand’s emissions reduction through to 2050 and the most expensive legislation in the country’s history, is being rushed through its final stages in Parliament. Emissions must be reduced domestically “as far as possible,” says the Bill, regardless of how many more tonnes of greenhouse gases could be avoided offshore. Such parochialism has consequences: $300 billion potentially added to the cost of reducing emissions to net zero; national income as much as 6% lower in 2050; a drastic reduction in New Zealand’s ability to influence global emissions; and the near-certain failure to achieve our emissions targets. In short, higher emissions and a material fall in living standards. Whatever the moral case for reducing emissions on this side of the border, it should be weighed against the real impact of forgoing international co-operation on the environment.

Worse, the Zero Carbon Bill gives priority to central planning over New Zealand’s Emissions Trading Scheme as a way to reduce emissions. The Bill requires the Minister for Climate Change to plan how and where emissions will be reduced. The plan may include any policy the Minister considers necessary, covering every sector of the economy, at any level of detail the Minister decides, and can be changed any time. The Bill requires only that the Minister’s policies are for a purpose of reducing emissions, but never requires policies are checked. Thus, the Minister’s plan is essentially unconstrained – policies with only a tangential link to emissions can be included.

One piece is missing from this puzzle. Currently, the Bill provides no mechanism to enforce the Minister’s plans. Without enforcement, the Zero Carbon Bill has no way turn advice, targets, budgets and plans into lower emissions. The government has not yet said how it intends to bridge this gap. Why require a Minister to prepare an emissions reduction plan if it will not be enforced? Perhaps the government intends only that these plans signal the future direction of policies, with each policy given effect through a separate Act of Parliament. Another possibility is that a future government, faced with non-compliance with its unenforced plans and a widening gap between actual and target emissions, could seek an amendment to give effect to the Minister’s plans directly through regulation, without separate legislation. Were that simple amendment to pass, it would effectively give the Minister for Climate Change sweeping powers over every part of the economy beyond Parliament’s scrutiny. The government has said its goal is to transform the New Zealand economy through planning.2 The Zero Carbon Bill is one short step away from creating the vast powers that will be necessary to achieve that goal.

Such power has precedent in New Zealand. Ministers held similar powers under the Public Safety Conservation Act 1932, which was abused during the 1951 Waterfront Strike, and the Economic Stabilisation Act 1948, which was abused in the late 1970s and 1980s. Just as these Acts delivered opposite outcomes to those intended by the parliaments that enacted them, the Zero Carbon Bill’s reliance on planning could end up raising New Zealand’s emissions. History suggests that once Parliament delegates extraordinary powers to the Executive, future governments will find it politically useful to retain them. It could take another economic crisis before those powers are finally removed. This issue has yet to attract material public and media attention because there is no visible enforcement power.

We propose three simple amendments to the Zero Carbon Bill that will give priority to emissions reduction and neutralise the Bill’s constitutional risk. The amendments we propose are:

1. Require effective action by introducing an overarching objective for both the Minister and the Commission that requires exercising their powers for “effective and efficient” emissions reductions and removals.

2. Remove section 5W to eliminate the domestic preference, allowing emissions reduction through the most effective combination of domestic and offshore mitigation.

3. Remove sections 5ZD–5ZF to eliminate the requirement that the Minister for Climate Change plan emissions reduction. The Commission and the Minister will be free to prepare plans, and give effect to them by way of Acts of Parliament, the appropriate level of scrutiny for such far-reaching powers.

These three amendments will make the Zero Carbon Bill about cutting emissions. They could increase New Zealand’s contribution to global emissions reduction by a factor of 20. Without them, the Zero Carbon Bill will be a costly but ineffective exercise. It will amount to little more than empty words. 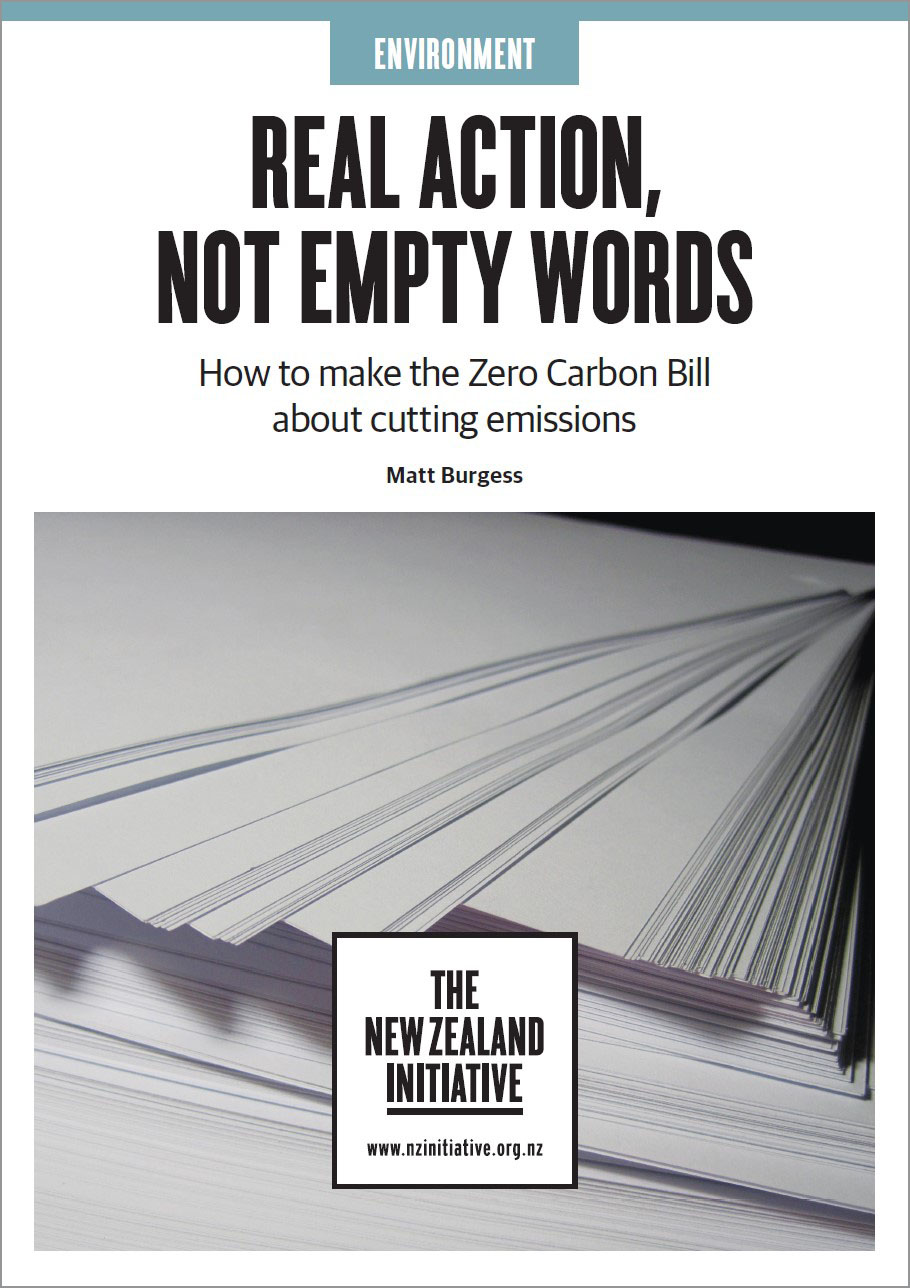 The mystery at the heart of the Climate Commission's strategy