Reports & Media > Reports > Research Note - When the facts change: How the ICCC saved New Zealand from a policy disaster

The Interim Climate Change Committee (ICCC) has delivered a landmark report, according to our new policy paper, When the facts change: How the ICCC saved New Zealand from a policy disaster.

Last week, the Government announced it had accepted the Interim Committee’s recommendations, effectively putting the 100% renewables policy on ice.

“The Interim Committee is directly responsible for New Zealand avoiding an environmental and economic disaster in the 100% renewables policy,” said Matt Burgess, author of When the facts change.

The Interim Committee has demonstrated emissions policies can be tested for their effectiveness, and how to deliver results in a way that can influence elected governments,” Mr Burgess said.

The New Zealand Initiative has also welcomed the quality of the process run by the Government.

“The Government’s decision to allow an independent committee to evaluate its flagship environmental policy, then make changes in response to the committee’s findings, is exceptional.”

“As a permanent, independent entity, the Climate Change Commission would make an ideal home for testing all emissions policies.”

“We have asked the Environment Committee to recommend the Zero Carbon bill makes the Commission expressly responsible for independently testing all emissions policies.” 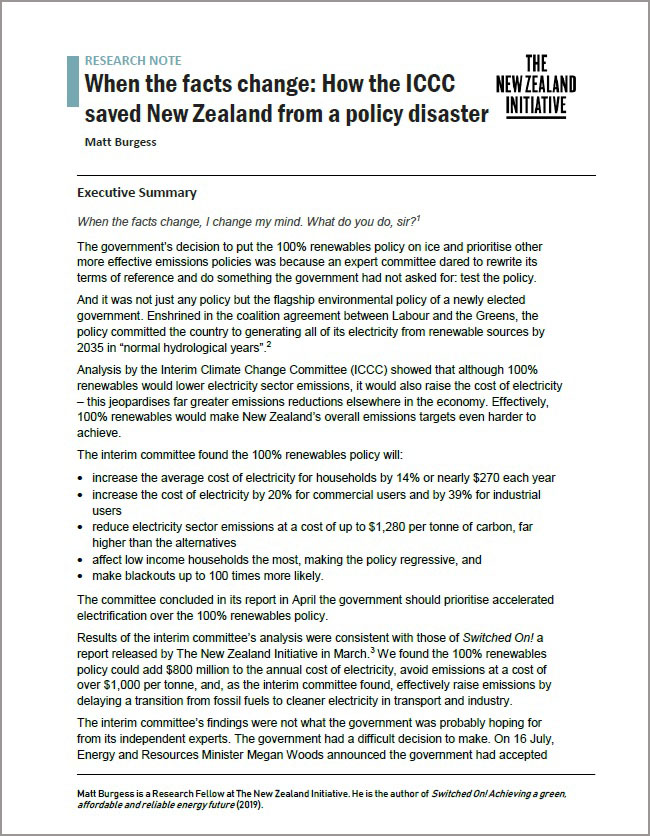 The mystery at the heart of the Climate Commission's strategy

Matt Burgess discusses the findings of the ICCC

The power of quantifying emissions policies