On Tuesday morning, 23 March 2021, the Government announced a set of housing policies that, among other things would substantially change the tax treatment of interest payments on residential investment properties.

The changes to tax policy are substantial. And the process by which they are being legislated almost guarantees that they will have equally substantial undesirable consequences.

The tax changes were not signalled ahead of time. Indeed, Minister Robertson had promised, before the election, that no new taxes were being contemplated.

Normal business taxes are levied on profits: the revenue business earns after expenses. Excluding the most significant business expense for owners of investment properties indeed amounts to a new tax.

The effects will be substantial and complex.

In this short policy paper, Chief Economist Dr Eric Crampton and Senior Fellow Dr Bryce Wilkinson do not purport to assess the effects of the policies announced this week, with no detail yet provided on its key features. It rather warns of the consequences of this approach of policy-making. 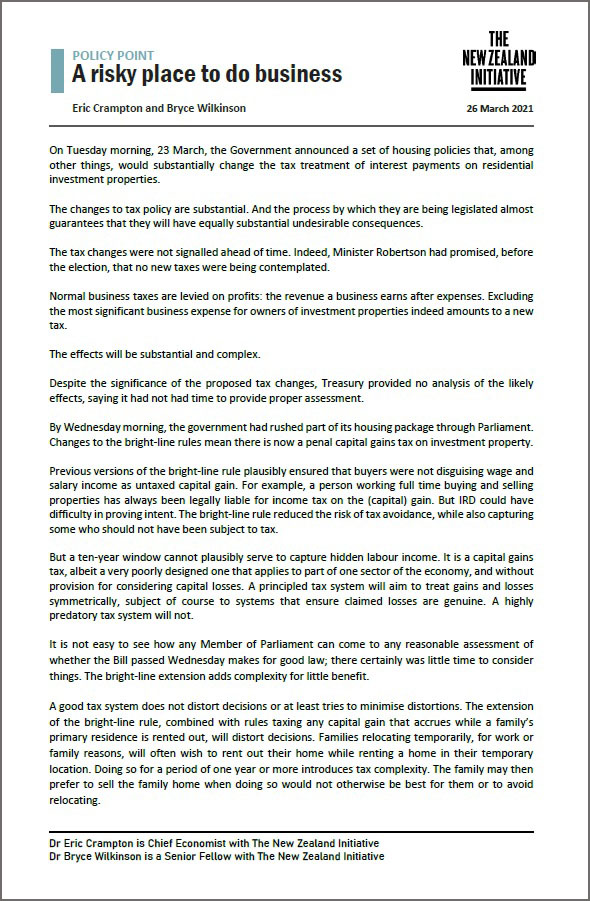 Housing crisis? You ain't seen anything yet

Building for an ageing population

If upzoning a neighbourhood is too hard, street-level rules could help

The three-headed monster to replace the failed RMA

KiwiBuild lottery will not restore the great Kiwi dream