Building for an ageing population

“Demography is destiny”, as French sociologist Auguste Comte once put it. Few developments shape our society more than the composition, the age and size of our population.

Yet important as demography is, it develops at a snail’s pace. From one year to the next, the changes are small; they disappear in the noise of other events. To see the effects of demographic shifts takes decades.

New Zealand is in the middle of such a demographic shift – the ageing of our population.

We have experienced some of it in the past. Yet, by international standards, the New Zealand population is still young. Our median age, that is the age which divides the country into two halves, stands at about 38 years.

In many European countries, that age is considerably higher. In Italy and Germany, for example, it now stands at around 47 and 48 years. In this sense, New Zealand is trailing Europe by about three decades, i.e. the last time these European countries were as young as New Zealand still is today was in the mid-1980s.

A look at Europe today can show us what demographic change has in store for us. We should use this demographic looking glass to prepare ourselves for the changes we can expect. Not least among them are the effects of ageing on the housing market.

As an example, let me take you to Essen, which is your columnist’s hometown. Situated in the Ruhr Area of West Germany, the city used to be home to coal and steel companies. After the decline of these industries, it has developed into a hub for energy and services.

Put differently, over this period, Essen added about 18,000 new flats and houses despite losing more than 44,000 people.

How can that be? What was going on?

The two contradictory developments can be reconciled by understanding population ageing. The city’s average age increased from 42 years to 44.1 years. It may not sound much, and the increase would have even been larger had it not been for migrants moving into the city. However, that small increase drove big changes in household composition.

Whereas previously more families were living with children, by 2019 half of Essen’s households were single people living alone.

What was happening in Essen was the typical demographic change process in which ageing populations live in smaller households. And because of these smaller household sizes, more dwellings are needed to accommodate them.

The only thing that makes Essen stand out is that even a shrinking population may require more dwellings.

In his new report The need to build, my colleague Leonard Hong looked into the links between demographic ageing and household sizes systematically. For the 36 members of the OECD, and over a period starting in 1970, Leonard collected data to see the link. The result is the graph below. 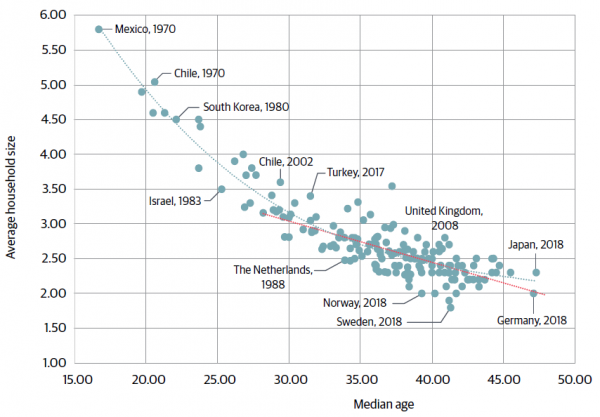 These countries are culturally diverse, yet they all follow the same trend line: older populations live in smaller households. Household size declines strongly at the earlier stages of population ageing. The household size effect then gets smaller in more mature populations, but it continues even in these populations.

Looking at New Zealand’s demographic change over the past 40 years, we can see that the same trend is present in our country as well:

With a median population age of 38 years, New Zealand is still young. And with an average household size of 2.6 people, New Zealand households are still relatively large. We can expect the trend towards smaller households to continue for decades.

This means that even a stagnant population would require ongoing additions to the dwelling stock.

However, New Zealand’s population is not stagnant. And it would not even be stagnant with drastically reduced net migration figures.

We can expect a double whammy over the coming decades: a population growing while also getting older, leading to increased demand for housing. Add to that a realistic expectation of some net inward migration, and you can calculate our future housing needs.

Leonard calculated several scenarios based on different assumptions for life expectancy, fertility and migration. In each of the most realistic scenarios, between 30,000 to almost 40,000 additional dwellings would be needed to cope with demographic change – per year.

The government and councils know of this demographic challenge. And there is only one way to deal with it to ensure that housing supply increases. The demography-induced extra demand cannot be wished away. It must be accepted as a given.

These sober findings put debates around New Zealand’s housing crisis into a different perspective. As bad as the housing market situation is today, there is worse to come if we do not unlock the supply side of the housing market now.

Yes, demography is destiny. But that does not mean one cannot prepare for it. On the contrary, with our future trends as visible as they are, it would be a tragic mistake to allow the housing market to be derailed by demographic change.

Build for the Future