New Zealand’s housing is a national catastrophe. House prices have gone up by 37% nationally since 2015, according to ANZ. Shortages drive rising prices. And the problem will only worsen as an aging population means even more housing will be needed.

According to the OECD’s Building for a Better Tomorrow report, New Zealand now has the least affordable housing market for the poorest families. We have left more Kiwis with a slimmer chance of achieving the Kiwi Dream and exacerbated social inequality.

But the Prime Minister’s proposed solutions, thus far, have addressed the symptoms of the housing shortage rather than its root causes.

The Prime Minister re-launched the Public Housing Plan to build up to 18,000 social houses by 2024. Social housing is important, but would there be nearly as much need for it if a surplus of housing overall made for affordable rents? The barriers faced by private developers are also faced by government-led building initiatives, as Labour discovered with KiwiBuild.

Making it easier to build more housing in places where people want to live is the only thing that can solve a housing supply shortage.

While demand-side measures, like banning foreign buyers, can be tempting, they do not address the problem. The pandemic has done far more than any foreign buyer ban to curb housing pressure arising from overseas. International students and international visitors, each of whom needs a place to live while here, have largely gone away. Net migration has dropped to zero. But rents and housing costs are sharply up regardless.

Hopefully, vaccination programmes in 2021 can restore normality to the border. But even if the border remained closed forever, migration is only one part of growing demand for housing.  Demographic change and an aging population, all on their own, will also worsen the shortage.

An aging population, all else equal, requires more dwellings. And while those kinds of changes are incorporated in household projections by Statistics New Zealand, and consequently into Council forecasts of future housing demand, they are underappreciated in popular discussion of housing pressure.

Long-run demographic changes in household composition (such as from nuclear families to single-person households) and population ageing affect overall housing demand and require flexibility about the kinds of housing that can be built.

In New Zealand, average household size has dropped from 3.2 in the 1970s to 2.6 in 2020 (similar to OECD countries as seen in the figure below). It could drop to 2.4 in the next two decades or less, according to Statistics New Zealand’s projections. 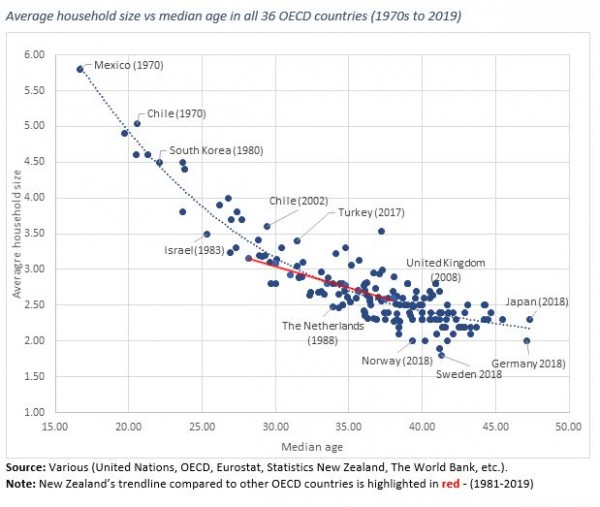 As family sizes reduce, median age increases along with demand for housing.

The causes of the housing shortage have been reasonably well canvassed. Over decades, councils have borne the costs of accommodating more housing while central government enjoys the tax revenues that flow from growing cities – higher income tax, company tax, and GST revenues. Making it harder to build more housing has been one way that councils have sought to contain the costs of growth.

The effects are stark. Housing shortages and high resulting housing costs undermine social cohesion. Families are forced to live in less pleasant and overcrowded dwellings, leading to deprivation, adverse health and social outcomes, and unstable environments for young children to grow and learn.

As of 2018, one in nine Kiwis were living in crowded housing, with Maori and Pasifika families most affected.

It will be impossible for the government to achieve promised increases in wellbeing without changing the fundamental direction of housing policy. But whatever your view on the best way of enabling more supply, the extent of the shortfall is larger when an aging population all on its own will increase the number of homes that are needed.

The government will soon be announcing its plans for remedying the problem. When thinking about the government’s proposals, ask yourself whether they enable more housing to be built, or whether they provide more tinkering around the demand side. Reform of the Resource Management Act will also be coming, but unless it improves the incentives facing Councils to enable more housing, it will not be as effective as it should be.

The housing shortage is bad enough already, even without considering the effects of demographic change that will only worsen the problem. Let’s hope that the government’s proposed policy responses strike to the root.