If land use and housing regulations prevent metropolitan areas from growing up or out as demand for housing increases, there is only one avenue of adjustment left.

Rents go up as more tenants compete for each home on offer, all else equal. Rising rents can bid up the selling price of houses and apartments. Prices can also bid up as interest rates decline, and as investors come to expect further future rent increases.

After-housing-cost measures of child poverty in New Zealand are roughly a third higher than similar measures taken before housing costs. As rents rise, multiple households may have to band together to cover the rent on a single home. Overcrowding brings a rather less pleasant living environment as well as risking health problems.

But inflexible land use planning also has more hidden costs.

When people cannot move to the places where their skills are most valued, because developers have not been allowed to build the homes where they would live, their lives are worsened.

Those individual costs add up. Chang-Tai Hsienh and Enrico Moretti estimated that aggregate American GDP growth from 1964 to 2009 would have been 36% higher if productive places, like the San Francisco Bay, were able to accommodate more people. Comparable work in New Zealand by Peter Nunns suggests that, had New Zealand adopted very flexible urban planning models in 2000, GDP would have been 8.4% higher by 2017. Our cities would have been more productive, and Kiwis living in Australia could come home if housing costs were more reasonable.

At the same time, constraints on new development create a modern rentier class. If businesses in a city become more productive, wages there will bid up as employers compete for staff. More people then want to move to the place where they can be more productive and earn more. In a flexible urban environment, that would lead to more building. When the rules prevent new construction, rents bid up instead. The benefits of productivity improvements then flow through to the owners of the local assets that are in artificially restricted supply: homes.

All of that was true before 2020’s Covid-19 pandemic and will remain true after vaccines have been distributed. But the consequences of broken urban planning systems have been magnified during a global pandemic.

The present value of any asset returning a fixed annual payment is higher when interest rates are lower. Investors respond to lower interest rates by bidding up the price of those assets. Even if rents remain constant, the value of the house generating the rental payment goes up.

In New Zealand, the pandemic hindered construction for only a few weeks. The construction sector is operating at capacity, but its overall capacity has been hindered by more than a decade of rather too little consenting. 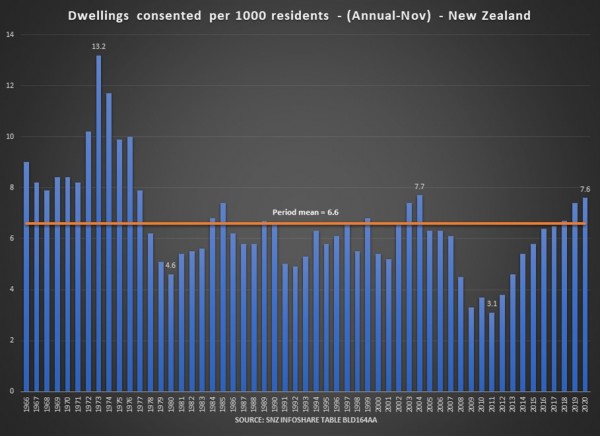 In cities with less flexible markets, cheaper money will instead mainly bid up the price of existing homes, rather than build new homes, all else equal.

Few ‘all else equal’ conditions have held over the past year. And some of those changes could persist well beyond the vaccines’ roll-out this year.

Recovery will require more flexible thinking about urban development as opportunities for remote work change the kinds of housing that people demand and make it more feasible to live far from work.

Most obviously, we all spent a lot more time at home than we have been used to. In late April, during the first wave of the pandemic, Upwork’s Adam Ozimek estimated that more than half of all American workers had shifted to working from home.

Working from home when the schools are closed and the children’s lessons are held via Zoom is far easier in a home with a spare bedroom than in one that was overcrowded to begin with. The pandemic exacerbated existing inequities between those who could afford enough living space, and those who could not.

Families weighing the risk of future pandemics might be happier to accept slightly longer commutes or higher prices downtown in exchange for larger living areas.

The shift to working from home also provided a discovery opportunity.

Prior to the pandemic, firms considering a shift to work-from-home arrangements would have faced substantial fixed costs in figuring out how to run their businesses remotely. Pandemic restrictions forced them to bear those costs.

Once those costs were borne, some discovered that those arrangements could work over the longer term. And that can provide benefits to both employers and employees. In September, San Francisco tech company Stripe began offering employees $20,000 to help cover their moving costs if they relocated outside of the Bay area. They would receive a 10% pay cut, but a substantial reduction in their cost of living.

Over the past two decades, technology has done more to augment metropolitan area advantages than to enable more dispersed working. Living and working near other people undertaking complementary tasks in other firms improved productivity. If the innovations developed to facilitate remote working during the pandemic reduced the premium attached to physical proximity, some of those changes will stick for the longer term.

New Zealand may provide an early indicator. Its restrictions in April were more stringent than those in other countries, but the country returned to normal by early June after Covid had been eliminated.

Because New Zealand has pursued an elimination strategy, business life returns to something rather close to normal between periods of pandemic restrictions. Restrictions at the border impede supply chains and bringing in skilled workers from overseas, but do not hinder other business activities. And that quasi ‘post-pandemic’ period has seen about a doubling of working from home. Additional workers will be spending some time working from home while primarily working from the office.

If these kinds of shifts prove sticky, with more workers either primarily working from home or combining work from home with less frequent team meetings at the office, the case for urban flexibility becomes even stronger. Firms demanding smaller floorplates downtown could see commercial buildings redeveloped into larger apartments for families needing more space. Workers able to work primarily from home may be happier with longer commutes on smaller numbers of days.

Rigid urban planning rules make it hard for metropolitan areas to respond to these kinds of changes. Enabling flexibility, making it easy to tear down, build new, and reconfigure spaces and uses to meet changing needs, builds resilience.

If any area of public policy were in need of a great reset following the pandemic, urban planning should be at the top of the list.

Enabling affordable housing through flexible land use planning rules that allow development in the places where people want to live is eminently desirable.

But it is even more important when underlying demand is in flux. The post-pandemic world may bring shifts toward demand for larger living spaces and smaller office spaces. The premium cities like San Francisco have been able to attract may erode. Metropolitan areas able to accommodate families fleeing more costly locales may reap the benefits. It all requires the ability to facilitate change and growth. If New Zealand could scale up housing construction considerably, we could, post-Covid, attract a lot of talented people who would continue to be paid by their overseas employers while spending their earnings here.

A Covid reset may force the more costly and inflexible cities to take a hard look at their planning systems. They will face greater competition from places with better rules.

And people may now be more ready to vote with their feet.