Welfare, Work and Wellbeing: From Benefits to Better Lives

New Zealanders should be a lot healthier and better off today than they were in 1970. Income per head is almost twice what it was 1970. The minimum wage is 50% higher, inflation adjusted. Life expectancy is up, and child mortality is down. Medical care is better.

The facts are tragically different. In 2012, the proportion of working-age New Zealanders on a sickness or invalid’s benefit was six times greater than in 1970. Real hardship is manifest. The incidence of child abuse and neglect is shameful.

All up, around 10% of the working-age population is now on a main welfare benefit. It was around 2% in 1970. What has happened?

Our welfare system is failing to help those with multiple problems
Our welfare system has failed to help those with many complex problems. It has failed in job-ready education and access to jobs. At June 2017, 67,000 had been looking for work for over a year while on the Jobseekers benefit. The wellbeing literature shows that involuntary unemployment is the pits for wellbeing.

Our system has passively fostered a self-perpetuating cycle of misery and benefit dependency. Around 15% of our children come to the authorities’ attention for abuse or neglect concerns by age 18.

Early entry to the benefits system foreshadows long-term benefit dependence. It also indicates likely child abuse, neglect and youth justice issues. Teenage beneficiaries tend to be long-term beneficiaries. At 30 June 2016 those with this history accounted for 75% of the future fiscal cost of working age benefits. That represents 75% of $76 billion.

We all want a welfare system that works
The old left vs right debates on the welfare state are futile. We should all be able to agree that there needs to be a safety net for those who need it. Many need more than just a welfare cheque. They need help to achieve their potential for fulfilling, independent lives. It should be common ground that welfare policy should aim to improve wellbeing.

Timely evidence-based early intervention makes sense. The previous government’s Social Investment Approach was an early intervention strategy. It used data pooled across government agencies to assess who was at risk. Potentially it can also help determine what works – which programmes are effective. It also restructured state delivery to better help those with complex cross-agency needs. The value of timely early intervention and taking a long-term perspective of beneficiaries’ well-being should be common ground. The 1999-2008 Labour-led government promoted the social investment concept before the National-led government adopted the term.

Let’s keep better track of wellbeing
The current focus of the Social Investment Approach on a fiscal measure rather than a well-being measure caused widespread concern. This report calls for systematic monitoring of post-benefit wellbeing. Job quality matters. But the fiscal liability measure should be retained. It is the only one that requires statistical assessments to be made of the sustainability of moves out of the benefit system. To not retain this complementary measure would be to throw the baby out with the bathwater.

The way ahead
The Productivity Commission’s 2015 report Better Social Services provided a good template for the way ahead. Governments need to get much better at contracting for outcomes. They should use integrated datasets to help assess where help is most needed and what works. They should seek to empower those with the most complex needs. They should seek to tap local knowledge, expertise and innovation. They should do a better job of measuring post-benefit wellbeing. They should maintain the annual actuarial liability measure. It helps assess the sustainability of reductions in beneficiary numbers.

It is common ground that welfare policy must aim to help people to improve their lives. The focus should be on their wellbeing. Let’s do this.

Click here to download the two-page report summary of Welfare, Work and Wellbeing: From Benefits to Better Lives.


About the author
Bryce Wilkinson is a Senior Research Fellow with The New Zealand Initiative and Director of Capital Economics Limited. He is the co-author of three earlier publications by the New Zealand Initiative related to this topic: Investing for Success: Social Impact Bonds and the Future of Public Services (2015), Poorly Understood: The State of Poverty in New Zealand (2016), and The Inequality Paradox: Why Inequality Matters Even Though it has Barely Changed (2016). 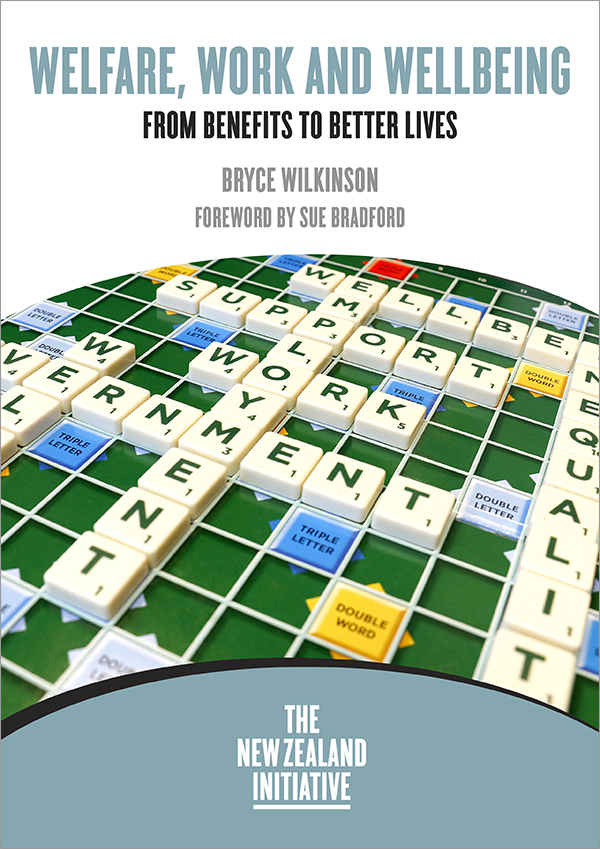 Media release: Government must address the cycle of disadvantage