Research Note: Safer arrivals and the path to 2022

Until August 2021, New Zealand laudably maintained elimination. Elimination was fragile. Risky practice in MIQ and inadequate travel safeguards meant constant risk of outbreaks. Policy that amounted to constant testing of luck could not withstand a more contagious variant. September’s lockdown in Auckland failed to re-establish elimination, and October brought an abandoning of elimination in favour of active suppression.

Covid seems established in Auckland. Vaccination rates are far too low to avoid substantial pressure on the health system, illness, and death without strong suppression measures being in place. Redoubled efforts to encourage vaccination are critically important.

Modelling published in The Lancet suggests that if vaccination rates are 90%, including those under the age of twelve currently ineligible for vaccination, even ten infected arrivals daily into the community would put strain on hospital capacity; at rates less than that, that strain would be unbearable in the absence of additional layered protections.

Where more than ten percent of the population is currently not eligible to be vaccinated, restrictions into 2022 are likely. Even at full vaccination, some measures, like improved ventilation in schools, will make sense.

By early August, over 70% of people in Spain had received at least one vaccination dose, and 60% were fully vaccinated. In late August, there were 38 Covid patients in Spanish intensive care units [ICU] per million population.

In Alberta, Canada, over 70% of the population over the age of 12 were fully vaccinated by mid-September – or 61% of the full population. Alberta’s Premier had eased Covid restrictions in pursuit of a summer of freedom. On 15 September, in early autumn, the Alberta government re-imposed substantial restrictions in response to a sharp warning from the province’s doctors that their medical system would fall apart within the month absent restrictions.

New Zealand has only 46 ICU per million population. OECD statistics from before Covid had New Zealand on about a third of the OECD average ICU capacity, per capita.

We here present measures that could assist in keeping case numbers down while vaccination progresses.

Our recommendations would enhance safety during the current outbreak, reduce the costs of new outbreaks that emerge, and enable the country to open as much as is possible, as safely as is possible, early in the year ahead. It recommends options that enable flexible responses to changing circumstances and governance arrangements that would result in better options being taken up. 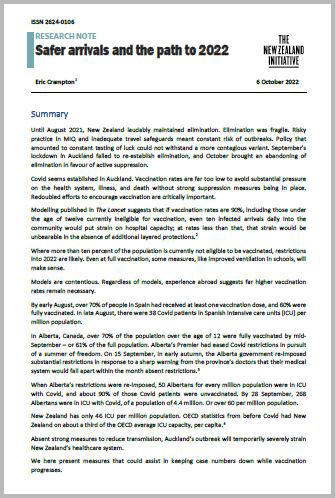