Kiwis know a lot about earthquake preparedness. We know that we have to store enough water and supplies to last for an extended period. We know that our houses need to be fixed to their foundations, and roofing tiles need to be tied down. And we know that our disaster plans must be up-to-date, so family members can find each other if cell phone networks are down.

But the government must attend to its own earthquake preparedness. The Christchurch earthquakes provided a few more important lessons for policy. Government must plan ahead to make post-disaster recovery simpler. And it must avoid creating the prolonged policy and regulatory uncertainty that hindered Christchurch’s recovery.

Though the government responded quickly, and achieved much that was important, shortcomings became increasingly evident during the recovery phase.

Recovery in the central business district (CBD) has lagged and faltered for several reasons. The over-riding Canterbury Earthquake Recovery Act 2011 had more virtues than weaknesses, but the latter damaged recovery.

The virtues included setting up the Canterbury Earthquake Recovery Authority (CERA), a time-limited special purpose recovery agent, to oversee and lead the recovery. It conferred it with special powers to set aside undue red tape ‘business as usual’ impediments. It set clear timetables and accountabilities for preparing rebuild plans.

CERA started well, but increasingly lost sight of its oversight role. And CERA’s governance structures did not make it easy to get back on track.

A major weakness of the 2011 Act was that it allowed recovery plans to be developed without sufficient regard for fiscal cost or commercial realities, including the need for regime certainty for households and businesses alike. Recovery depends on decisions by multitudinous firms and individuals on where to live, work and rebuild. Undue uncertainty impairs those decisions.

Private recovery depends on timely reliable detail about infrastructure rebuild and clarity about rights to rebuild private property and resume business. The residential red zone decisions shocked people, but they provided much regime certainty. The CBD plans developed under the 2011 Act did the opposite. They failed to provide the necessary detail.

The misguided precinct concept further stymied private recovery in the CBD. The plans sought to dictate where private investment should occur, rather than to free up spontaneous private recovery.

The 2011 Act gave the planners too much power to egregiously impair private property rights, without compensation. The elitist presumption was that government needed to build major downtown projects if the business confidence for downtown recovery were to return.

Yet, in the event, the government lacked rebuild competence, and worsened downtown outcomes.

It is telling that the most substantial downtown recovery has happened outside of the main areas of government control.

Meanwhile insurers and many households were mired in many complexities. The ground did not stop shaking, causing multiple insurance claim events. There were unprecedented liquification issues. There were EQC/insurer interface issues, and some serious legal uncertainties. The industry had to scale up massively; staff training was a challenge.

Much has been learned from the insurance difficulties. Insurance arrangements are improving, and we expect more satisfactory experiences for claimants and providers in future.

Policy recommendations
Disaster preparedness
1. Central and local government should focus on providing early certainty to households and businesses about its responses to natural disasters.

2. Central government should establish a pre-existing framework for any post-disaster recovery agency. It should have immediate access to ‘off-the-shelf’ plans and systems. Governance structures must be better fit for purpose, defined, and constrained.

3. Councils’ long-term plans should include disaster contingencies. They might include:
• provisions for responding to a sudden shortage of liveable housing.
• triggers that automatically amend, suspend or remove ‘business-as-usual’ provisions likely to unduly impede recovery if a natural disaster occurs.
• pre-agreed specific ‘nice to have’ projects in the event of a major rebuild opportunity. The aim is to limit delay from too much ‘blue sky’ debate post-event.

2. A recovery agency should again be set up expeditiously. Its structure should be to allow competent local authorities to play a full role while playing a more supportive role where needed.

3. Anchor projects and precinct designations should be avoided.

4. The planning and building functions should be separated for any future anchor projects. The skills are different.

5. Government should ensure any post-disaster emergency legislation incorporates provisions for takings based on the Public Works Act rather than bespoke measures.

About the authors
Dr Bryce Wilkinson is a Senior Research Fellow with The New Zealand Initiative and Director of Capital Economics Limited. Prior to setting up the latter in 1997, he was a director of CS First Boston New Zealand (now First NZ Capital). He is co-author of several Initiative reports. Bryce holds a PhD in Economics from the University of Canterbury and was a Harkness Fellow at Harvard University.

Dr Eric Crampton is Chief Economist with The New Zealand Initiative. He has served as Lecturer and Senior Lecturer with the Department of Economics at the University of Canterbury from 2003 through 2014. He was resident in Christchurch during the earthquakes. Eric is co-author of several Initiative reports, including In the Zone and Decade of Debt. He is also author of the popular economics blog Offsetting Behaviour.

Jason Krupp was Research Fellow with The New Zealand Initiative during the early drafting of this report before he joined the Office of the Minister of Finance in April 2017. His previous reports include The Local Formula: Myths, Facts and Challenges, The Local Benchmark: When Smaller is Better, and The Local Manifesto: Restoring Local Government Accountability. Jason has a degree in journalism and a post-graduate business diploma from Rhodes University. 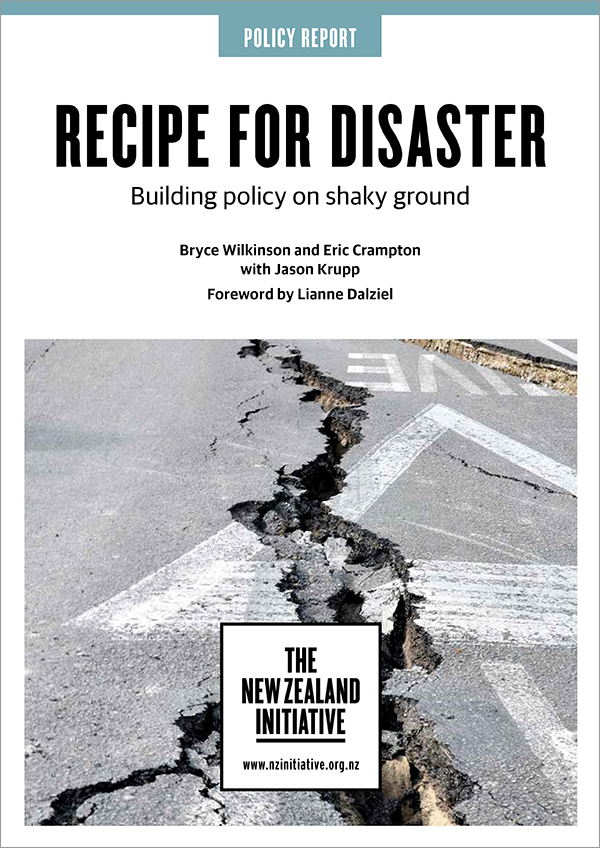