Reports & Media > Opinion > What do Kiwis know and not know?

What do Kiwis know and not know?

Imagine putting $100 in a bank account that earned 2% annual interest but being unable to calculate how much would be there at the end of one year? ($102) As an NBR reader, that question was probably easy to answer. Yet, in a recent survey of 1000 adult New Zealanders, only 57% answered correctly.

Kiwis performed much better when asked to name the capital of Australia and whether Winston Churchill was fictional or real. But when it came to maths and some basic questions from science and geography, far too few succeeded. Only 48% knew the right answer to a simple question on distance given time and speed.

These results and more are from a survey commissioned by The New Zealand Initiative into the state of this nation’s general knowledge. Elsewhere in the world, longitudinal studies provide insights into changes in knowledge over time. As no equivalents exist in New Zealand, the Initiative commissioned a snap-shot.

The full survey results, with breakdowns by gender, age, area type and deprivation decile, are available on The NZ Initiative’s website. This table summarises the results. 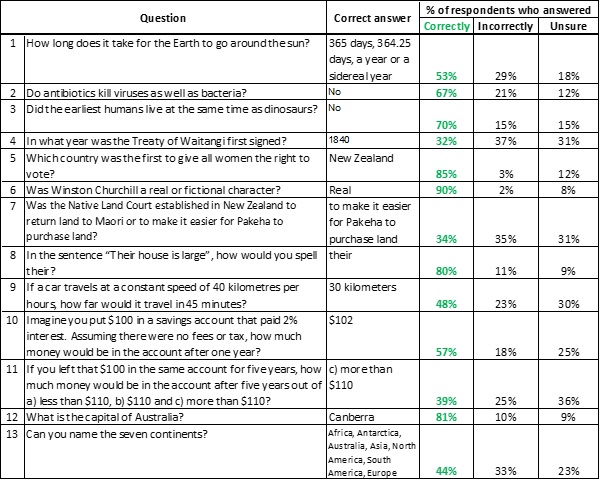 There will, of course, be disagreement about the relevance of some of the questions. Is it really necessary to know the year the Treaty of Waitangi was signed? Why remember maths when we have calculators? Does anyone care how the earth and sun move in a year?

In fact, there is much more to education than merely recalling snippets of information. None of these questions gets close to the concepts or knowledge-producing processes that define our disciplines. A full score might point to prowess in pub quizzes but says little of one’s wisdom or employability.

Despite these caveats, we hope Kiwis can agree that knowledge matters for personal fulfilment, civic participation and democracy. We hope Kiwis also agree that after spending more than $130,000 educating each New Zealander, we should expect wider familiarity with a basic core of knowledge.

A society cannot shape its future if it does not understand its past. That is why all Kiwi school leavers, regardless of whether they go on to law school or trade school, need knowledge of history, art and literature. We cannot appreciate our position in the world, why we developed the way we did and what makes us unique without knowledge of physical and human geography, economics and biology. We cannot grapple with the opportunities and risks of technology without a basic knowledge of science, of concepts such as control groups and of how scientific understanding grows.

To participate meaningfully in democracy and think critically about politicians and policies, citizens must have knowledge from the world beyond their confines.

Without broad knowledge, we all risk falling prey to fake news, manipulation and false prophets. Without knowledge, debates about civil liberties, state subsidies and climate change will be flimsy and futile. Whole languages, with words such as whakapapa, mātauranga and mana, can be lost. Insights into humanity that come from exemplars such as Miss Havisham, Sir Edmund Hillary and Hamlet may disappear. Adjectives such as Orwellian, soviet and Dickensian can no longer be used. The significance of Waitangi, Tiananmen and Berlin will quickly fade.

Of course, no survey can capture all that Kiwis know, let alone judge whether it is enough.

However, our snapshot survey has revealed that in New Zealand in 2019, only 44% of adults can name the seven continents; 68% do not know the year the Treaty of Waitangi was signed; and 47% do not know how long it takes for the earth to circle the sun. With these kinds of gaps in basic knowledge, it seems reasonable to question how we can be expected to engage meaningfully in, for example, debates about vaccinations, GM crops and climate change.

Kiwis’ poor grasp of maths is another serious concern highlighted by the survey. International longitudinal studies have long told us the same. For example, since the OECD began assessing the maths performance of 15-year-olds through PISA tests in 2000, New Zealanders’ average score for maths has dropped by more than that of any other country, down 42 points, where 30 points are roughly equivalent to one year’s worth of schooling.

The fact that 52% of Kiwis could not answer the most simple question about distance, time and speed, and that compound interest was beyond the comprehension of 61% of adults, should be a serious cause for concern. Without basic maths, much of tertiary learning and higher-paid work is out of reach; more fundamentally still, the most basic daily tasks become a strain. Try doing DIY, baking a cake or taking out a loan when you do not understand percentages or ratios. The fact that some Kiwis understand compound interest and others do not can only exacerbate wealth gaps in our country. Our poor grasp of maths looms as an ominous problem for society.

What can be done?

The survey results mark the start of a much larger project the NZ Initiative is undertaking about knowledge and the New Zealand curriculum. It is intended as an opener to a wider national conversation. Despite the early stage, the potential for cross-party support for a canon of knowledge looks strong.

Last week, National launched its Education Discussion Document (www.national.org.nz/education). Simon Bridges described the importance of developing the basics of reading, writing, maths and knowledge. Respondents to the document have been invited to consider what it will take to ensure all children encounter a “knowledge-rich curriculum.”

Similarly, the Coalition government has tacitly acknowledged shortcomings in the national curriculum through its announcement that from 2022, every school must teach a core of knowledge of New Zealand history.

As the government has realised, the current national curriculum is too high-level, too permissive and too vague. However, if students will benefit from a prescribed core of knowledge of New Zealand history, why would they not also benefit from one focused on other subjects as well?

The debates and disagreements about what will and will not make it into the new New Zealand history curriculum will be impassioned, esoteric and intense. As a bicultural nation, with a colonial past whose legacy plays out in troubling national statistics, it will never be easy to determine what knowledge every child should learn.

However, thoughtful, knowledge-informed debates and disagreement are essential to any democracy. As a nation, we need to decide what knowledge matters so future generations can keep our democracy and our nation strong.

Briar Lipson is a research fellow at The New Zealand Initiative.

Ignorance is not bliss, even in Bluff