Reports & Media > Opinion > The next Euro crisis has just begun

The next Euro crisis has just begun

Just as Europe’s economies are emerging from the Covid-19 recession, the next big European crisis is already visible on the horizon. It is just not clear what kind of crisis it will be: another debt crisis, an inflation crisis, or a combination of both.

For more than a decade, the European Central Bank (ECB) has been in crisis-fighting mode. It first dealt with the Global Financial Crisis, the sovereign debt crisis and the banking crisis. Last year, it added the Covid-19 recession to that list.

As different as these crises were, the ECB’s response was always the same. It created more central bank money, bought up government debt and, in doing so, slashed interest rates. And really, that is all central banks can do with their tools.

This ultra-loose monetary policy bought time and was politically sustainable. At least for as long as consumer prices did not rise.

The most obvious immediate losers of the ECB’s policy were savers. If you are not earning any interest (or must pay your bank penalties), even low inflation rates eat up a good chunk of your capital over a few years.

But savers are too dispersed, and losing a couple of percent of your savings per year is too small a sacrifice to lead to an immediate revolt. Plus, savers could always rescue their money by investing it in other asset classes (which many did, just look at the property and stock markets). 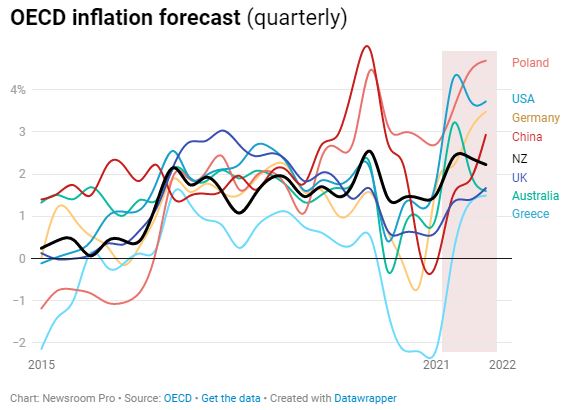 The ECB could have continued to justify its ultra-loose monetary policy for as long as European economic growth remained sluggish and price inflation under control. However, this period is now coming to an end – and it creates multiple dilemmas for Europe’s central bankers.

The OECD’s latest growth projection showed strong annual economic growth rates between 3 and 6 percent for the next couple of years across Eurozone members. This would see these countries recover what economic activity they lost during the pandemic.

At the same time, a surge in inflation is making itself felt in Europe. Only last week, the Bundesbank warned German inflation could reach 4 percent by the end of this year.

The combination of these two developments creates a policy nightmare for the ECB. It is hard to justify negative interest rates and further quantitative easing when Europe’s economies are growing strongly again (at least by European standards). And it becomes harder to explain to savers why they should now accept losing 4 percent of their capital to inflation each year.

It is proof, once again, that Europe is far from the ‘optimal currency area’ (OCA) needed to have a workable monetary union. As the late economist Robert Mundell once explained, an OCA requires a great degree of economic integration and synchronised business cycles. Neither feature has ever been present in Europe. And that makes an exit from the current stimulatory environment so much harder.

There are political complications, too. The super-low interest rates of the past decade allowed European governments to live with large amounts of public debt. This is not only true for those heavily indebted Southern European governments. It is the same story for the supposedly more stable central European countries.

Take Germany, for example. Last year, the Federal Government paid only 6.4 billion Euros in interest – the lowest level since the late 1970s. Prior to the GFC, interest rates were positive, and those annual payments were typically around Euro 40 billion. A return to such levels would be painful for the German minister of finance.

For other countries, a return to past interest rates would not just be painful but potentially fatal. Greece’s debt level now stands at more than twice its annual economic output (210 percent of GDP). For both Spain and France, that number is about 115 percent. For Italy, it is 155 percent.

The only reason these highly indebted countries have been able to afford these levels of debt throughout the pandemic was the ECB’s ongoing support. Had the ECB not generously bought up these countries’ government bonds, refinancing costs would have already pushed them into a sovereign debt crisis.

The level of support should not be underestimated. In 2020, Eurozone governments issued a total Euro 991 billion new government debt – of which 95.5 percent ended up on the books of the ECB and its national subsidiaries. For Italy, the ECB purchased 117 percent of the new debt Italy issued last year – meaning it also soaked up pre-Covid debt.

No wonder, given these interventions, Italian government 10-year bonds are only yielding around 0.75 percent. There is no real market for Italian bonds – only a political one in which the ECB determines what interest rates for Italy’s government debt it deems acceptable.

But with the return of economic growth and inflation, the prerequisites of such clandestine, ongoing government bailouts are gone. The ECB can, of course, continue its life support for Italy, Greece and other countries. But it will come at the expense of an acceleration of inflationary tendencies – and with it the further expropriation of private savings, income and wealth.

There is no positive outcome from entrenched fiscal deficits, artificially sustained by desperate central bank measures. There is not even a positive choice.

The ECB cannot wish to risk a repeat of the 2010s European debt crisis, which would happen if markets (instead of central banks) determined yields on government debt. But it cannot tolerate a sustained rise of inflation either.

Europe’s central bankers probably will hope the inflationary pressures will just be temporary and somehow disappear by themselves.

But with such wishful thinking, they might only make a bad situation worse.

If inflation does not magically subside, the ECB’s continued ultra-low rates will push it even higher. That, in turn, will also make the eventual interest rate hike stronger than it would otherwise be. Which, of course, would create an even bigger sovereign debt crisis down the track.

The coming couple of years in which Europe’s economy recovers from Covid-19 could ironically bring about the worst monetary crisis Europe has ever experienced.

The next Euro crisis has just begun.

Will Europe’s recovery be worse than the recession?

The coming monetary crisis in Europe