Reports & Media > Opinion > Will Europe’s recovery be worse than the recession?

Will Europe’s recovery be worse than the recession?

Europe’s economy is at risk of becoming a place for the walking dead. That is how you can read a new report by the European Systemic Risk Board (ESRB).

Established in 2010, the ESRB is an independent body within the EU. It is a result of the Global Financial Crisis and, as the name suggests, its task is monitoring significant risks to financial stability.

Last week, the ESRB released a glimpse into Europe’s post-pandemic corporate environment. Its report ‘Prevention and management of a large number of corporate insolvencies’ may sound technical. But it points to one of the most challenging tasks ahead for economic policy: the transition from economic emergency measures towards some new form of normality.

As the ESRB’s experts document, the Covid-19 pandemic has not caused an ordinary recession – at least not in Europe. Normal economic downturns are characterised by spikes in economic insolvencies and jumps in unemployment.

This time was different. There was a sharp economic contraction, to be sure. It was among the most severe contractions ever recorded in times of peace. And yet, the usual effects of recessions – insolvencies and unemployment – did not materialise.

In fact, the opposite happened. Across Europe, bankruptcies actually fell over the course of 2020 (see chart).

There are three principal reasons bankruptcies trended down despite the crisis. First, governments have provided direct support to the corporate sector. The ESRB counted more than 600 such programmes for its 31 member states.

Second, these government support programmes were accompanied by loose monetary policy. Central banks around the world have flooded markets with liquidity. The European Central Bank (ECB) is no exception. Its president, Christine Lagarde, has already created more fresh central bank money than her predecessor Mario Draghi did over his long time in office.

Third, in many countries, insolvency laws were suspended. Where companies would have usually had to file for insolvency, those rules did not apply during the pandemic. This gave companies time to recover even when they would have been technically bankrupt.

In some ways, this crisis response is not unprecedented. During the Global Financial Crisis, too, governments engaged in myriad ways to support the economy and individual companies; and central banks provided monetary easing.

However, the scale of support and stimulus this time has dwarfed such past measures. As a result, the insolvency outcomes differ vastly from the GFC and other recessions (see chart). 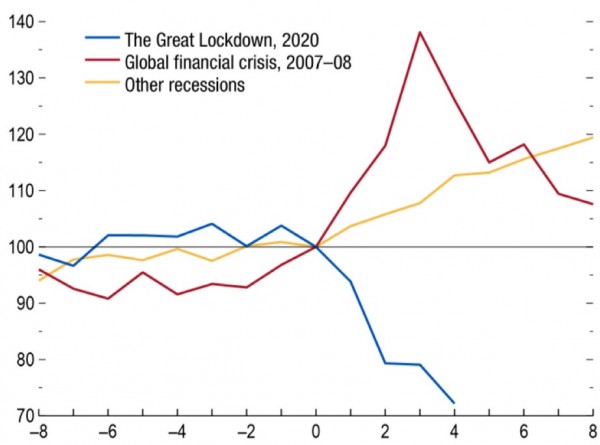 Bankruptcies in 13 advanced economies (last pre-recession quarter for each crisis = 100) - Source: ESRB based on IMF

At first sight, the declining insolvency trend could be a reason to celebrate. Governments and central banks have achieved their goal to stabilise companies through a most challenging time.

Yet it would be premature to declare victory - because the companies that have survived for now are also saddled with substantial debts because of the crisis. As the ESRB points out, “corporate debt levels have already risen by several percentage points relative to pre-Covid GDP levels.”

As normal insolvency laws operate again, the higher corporate debt levels could become a problem for many corporates. But perhaps that is not even the biggest worry.

Even before the pandemic, the ‘zombification’ of the European economy was a concern. What is meant by that is the growing number of companies in which profits are smaller than interest costs. They are kept alive, not least, by historically low-interest rates, which allow them to refinance cheaply.

The pandemic recession has created many more such firms. For Germany alone, the IW German Economic Institute estimates an extra 5,000 ‘zombies’ have been created in the first year of the pandemic.

For the ESRB’s experts, the growth of the zombie economy presents a double challenge. On the one hand, it recognises that zombie firms are a drain on the economy because they prevent capital and labour from being allocated to more innovative and sustainable uses. On the other, the ESRB is mindful that it is difficult to determine which companies will be viable.

Beyond that, there remains a risk that rising prices will force central banks to increase interest rates. For zombies, this would be deadly. But for other companies, too, this could be a problem if they are still reducing their extra debt burden from the crisis.

Taken together, the picture emerging for Europe is worrying. Maybe a big wave of insolvencies will wash over the continent right when the public might have believed that the pandemic recession is over.

In this sense, the ‘recovery’ could be much more unpleasant than the crisis was. Or the recovery could be over before it has even taken hold.

With its new report, the ESRB has done what it was meant to do: warn of a systemic risk to the European economy.

And still, having read the report, one doubts that anyone or any institution could prevent the day of reckoning that many political interventions seem only to have postponed in Europe’s Covid-19 recession.

The coming monetary crisis in Europe