Reports & Media > Reports > Research Note: To Graduation and Beyond

Research Note: To Graduation and Beyond

The purpose of secondary schooling varies depending on who you ask. For many parents, educators, and education professionals, schooling is meant to transmit the most ‘powerful’ knowledge that exists. For others, it is to transform and prepare society for the ever-changing future.

Quantifying such subjective outcomes is a great challenge the education sector faces today. Academic measures such as NCEA are considered by many as a good proxy for those in-demand outcomes in students, at least partially. Others say such measures fall short in many areas. Indeed, NCEA is not a perfect measure but it is a practical metric that educators, researchers and government can use to identify and study student and school performance.

University Entrance (UE) attainment is arguably a better measure of student achievement. However, like NCEA it does not capture all the aspects of educational attainment that educators, parents and society care about.

Fortunately, innovations in data management have helped The New Zealand Initiative study how our schools are performing on outcomes beyond NCEA and UE attainment.

Using data on more than 500,000 students in Statistics New Zealand’s Integrated Data Infrastructure (IDI), this report shows how nearly 500 secondary schools are preparing students for further tertiary education. Specifically, it examines whether students are progressing into tertiary education, and whether they complete a tertiary qualification after enrolling.

Of course, not every student needs to or should go on to tertiary education. There are many worthwhile opportunities outside of formal education.

Nevertheless, a successful secondary school should provide every student with the skills and knowledge they need to succeed in their endeavours after graduation – tertiary education included. For this reason, this report shows how effective our current school system is in preparing the next generation for further tertiary study. Future IDI research should investigate alternative post-school outcomes such as employment, benefits uptake, and interactions with Justice and Corrections. 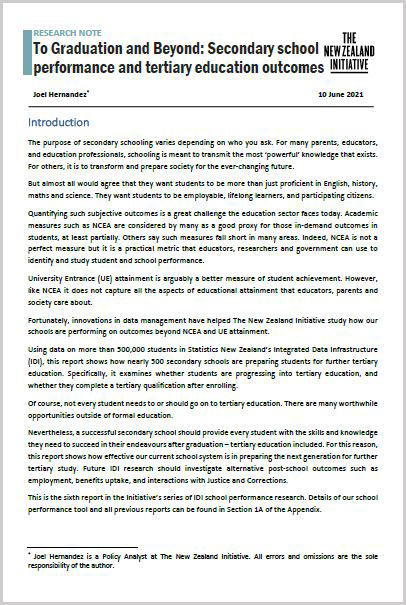 Podcast: Joel Hernandez on his IDI journey with The New Zealand Initiative