Policy Point: Minimum wages to the maximum: The risks of lifting the minimum wage

On 24 November, the Helen Clark Foundation and the New Zealand Institute of Economic Research released a joint report (the HCF&NZIER report) outlining an inclusive growth agenda for New Zealand. Its recommendation on the minimum wage is concerning and risks hurting the most vulnerable.

The report argues for a much higher minimum wage to help reduce inequality and lift productivity. This is despite the fact that the minimum wage was already increased from $17.70 to $18.90 in April of this year. In particular, the report recommends a “living wage” of $22.10 per hour.

The report argues that any potential benefits of higher minimum wages would not come at the expense of significantly fewer jobs, according to studies conducted overseas. But, there is good reason to be sceptical about the applicability to New Zealand of the most common results from the minimum wage literature overseas.

In fact, relative to the median wage, minimum wages vary widely across developed countries. In the OECD, for example, the rate ranges from 32-90% of the median wage. Estimates of employment effects of minimum wages also vary widely. New Zealand already has one of the highest relative minimum wage rates in the OECD which means jobs are likely to be at greater risk from further increases than in other places. 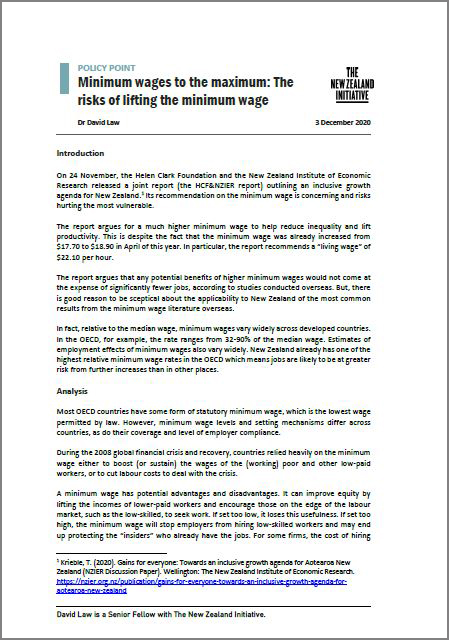 Raising the minimum wage will create a 'bigger mess'