The Challenge. Which moves faster: technology, or the regulation that tries to keep up with it?

It is common knowledge that the pace of technological change is always increasing. But our country’s ability to adapt to new technology depends on whether our regulations can keep pace. If they cannot, then we will get left behind.

New Zealand has always faced the twin tyrannies of size and distance. We are small and remote.  If our rules hold back adoption of new technology, we can add a third tyranny to the list: being out of date.

How are we doing?
Some things are good.

When Rocket Lab presented the New Zealand government with the opportunity to bring New Zealand into the space age, the government quickly built the regulations that would let it happen. These rules also set the stage for a growing space industry. Test launches at Mahia Peninsula started this year.  New Zealand is likely to become the eleventh country in the world to send rockets into orbit.

And we can stay one step ahead by simply refusing to adopt risible approaches seen elsewhere. An example is European regulations that make it hard to run search engines.

General rules, like the Consumer Guarantees Act and standard liability rules are often adequate on their own to meet some technology challenges.

Other things are less encouraging.

New Zealand’s overall regulatory apparatus must be more nimble. We need adaptable regimes that allow entrepreneurs to innovate without the need for constant permission. When innovation requires cumbersome permissions, innovators seek greener fields. And that is even more true for small and distant countries.

We need a greater focus on the user’s perspective. Regulation works better when it is user-centric. Analog-age regulation protected consumers from dangers that have since been overtaken by new technologies. Often those new technologies give consumers better ways to inform and protect themselves. Trying to shoehorn new services into old regulatory models hurts everyone except old incumbent producers.

New Zealand is a small country, and can learn from other places. Flexibility to adopt standards from other countries can also let firms find what works best for them and their customers. It helps to ensure New Zealand is not left behind as we cannot afford to re-invent every regulatory wheel.

What does this report suggest?

We argue that a wide range of regulatory provisions need updating for the digital age.

New Zealand has a reputation for its ease of doing business. Locals may laugh about the competence of the bureaucracy but other countries can have it far worse. New Zealand’s flexible regulatory regimes have generally valued outcomes over procedural compliance.

We are too small and distant to afford to be anywhere other than at the bleeding edge of technological regulation. We must act and act now.


About the authors
Eric Crampton is Chief Economist with The New Zealand Initiative. He has served as Lecturer and Senior Lecturer with the Department of Economics at the University of Canterbury. He is co-author of several Initiative reports, including In the Zone and Decade of Debt. He is also author of the popular economics blog Offsetting Behaviour.

James Ting-Edwards is an Issues Advisor at InternetNZ, where he works to inform thinking and lead discussions on policy issues, helping New Zealanders to unlock the full benefits of the Internet. James has recently led work on telecommunications law reform, future directions for copyright, and effects of the Trans-Pacific Partnership Agreement. He retains links with the legal profession, and sits on committees considering technology and legal issues for the NZ Law Foundation, the ADLS, and LegalTechNZ. 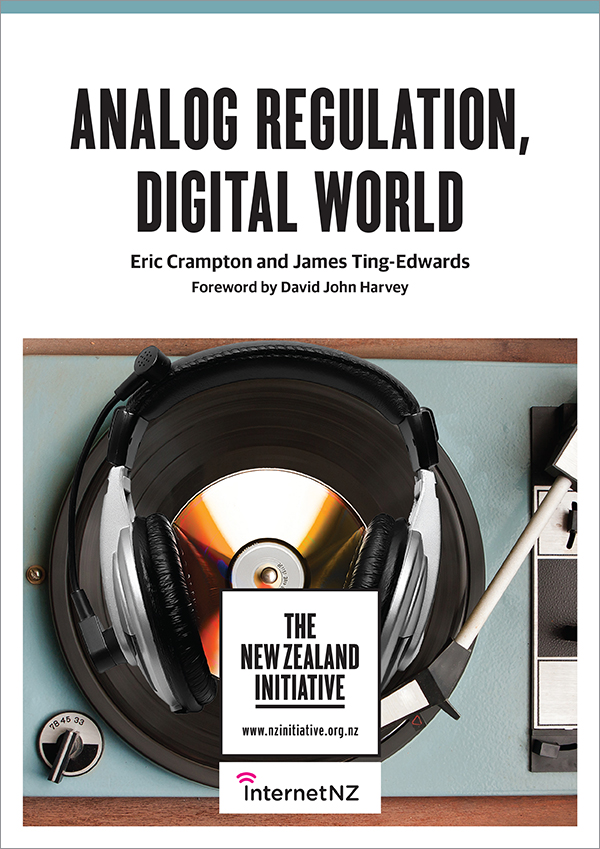 Media release: Keep up with technology or be left behind