Parents lucky enough to be able to choose among different schools weigh up schools’ deciles and NCEA performance. Unfortunately, neither of these necessarily show which would be the right choice for their children.

In recent years, reporting on a school’s success has focused on how many students achieve government targets but these figures tell a limited story of success. It is important to understand the reasons behind these discrepancies and share good practice between schools.

Though pass rates are instructive, focusing solely on them - without considering the challenges schools face - risks rewarding coasting schools while missing real stellar achievement in other schools.

In the same manner, a teacher might struggle to progress the learning of students for whom English is not a first language, but might be doing an excellent job when compared to other teachers across the country. Teachers deserve to know so they can learn from each other.

It is difficult to scale academic excellence in the schooling system because its definition and assessment are flawed.

This final report in a three-part series on school performance recommends a path towards a more transparent, professional, and supportive school system.

The Education Ministry, in its stewardship and monitoring role needs to be better at collating, analysing, and disseminating comparative data back to the sector and to parents.

Quality information is the first and necessary step.

The next step requires that school leaders be trusted as the professionals they are, and be given the authority aligned with the complexities of their roles. Finally, better Ministry analysis of what works, and what does not, will provide the basis for more effective support for underperforming schools, and for exemplary schools to be identified and incentivised to share their successes.

The government relies on end-of-year attainment pass rates as headline indicators of school success, while overlooking contextual differences in school cohorts. This leads to erroneous conclusions about which schools over- or underperform relative to schools with similar intakes. NCEA rankings unfairly stigmatise as failures schools with students from low socioeconomic communities, while schools with affluent students sometimes earn undue praise.

Parents deserve transparent information about the quality of schools, and schools need better comparative data to support their improvement strategies.

Recommendation 1: The government should implement a fairer measure of school success that considers differences in intake and compares similar schools.

Recommendation 3: The government should introduce a teacher appraisal framework that better recognises, develops and supports great teachers; explicitly links teacher input to student achievement; and recognises that every class is different.

Recommendation 4: The government should require persistently poorly performing schools to provide anonymised class information to the Ministry, and in return receive information about their teaching quality.

Recommendation 5: Schools wanting to promote teachers into Communities of Learning lead roles should demonstrate how these teachers have measurably influenced student outcomes.

New Zealand is well placed to make these changes, at least in the last three years of high school. We have data collated by Statistics New Zealand on student and family characteristics to better measure school performance. But because parents, principals and boards do not know it can be done, nobody demands it.

Recommendation 6: Effective leaders should be trusted as true professionals and granted total budget autonomy to lead their schools.

Recommendation 7: The Ministry, with ERO, should systematically analyse school interventions to determine what has worked for which challenges, and why, to inform future interventions.

Recommendation 8: The government needs an alternative and collaborative improvement framework to better support persistently low performing schools. This could include facilitating exemplar schools to share their expertise by formally combining several school boards, and encouraging the non-government sector to participate in education provision through school governance.

AUTHOR
Martine Udahemuka is a Research Fellow at The New Zealand Initiative working on education policy. She is the author of Signal Loss: What We Know About School Performance and Fair and Frank: Global Insights for Managing School Performance. Martine has also published on migrant and refugee integration in New Zealand. She was a student success advisor and learning consultant at Massey University, and was with the Aid Programme at the Ministry of Foreign Affairs and Trade.

Martine holds a Master of Arts in industrial and organisational psychology with First Class Honours from Massey University. 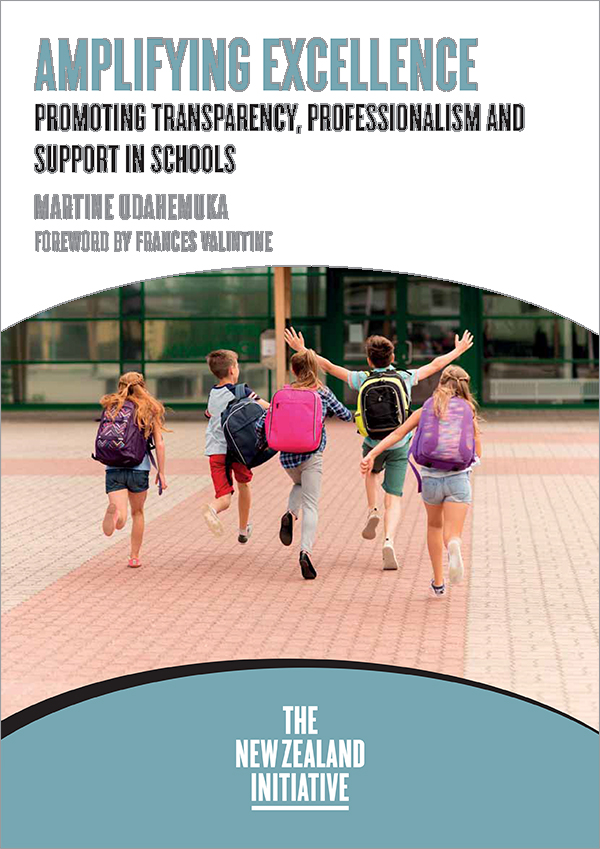 Amplifying Excellence on The Project

Martine Udahemuka talks about Signal Loss: What we know about school performance