Reports & Media > Opinion > What we now won’t know about Covid

What we now won’t know about Covid

The government’s Covid testing system has fallen apart and we are now largely flying blind, as Siouxsie Wiles put it.

But it is worse than that.

In this phase of the pandemic response, we all need to be weighing up risks and protecting ourselves.

And too much of what we need to know seems wilfully unknowable – from regional covid prevalence figures to hospital loadings and ambulance call-out times.

In 2002, US Defence Secretary Donald Rumsfeld answered a question about purported Iraqi weapons of mass destruction by pointing to known knowns, known unknowns, and unknown unknowns.

Going into the current Covid wave, I think we could usefully add another category: the wilfully unknowable. That category is really going to bite as Kiwis shift to self-management.

The known knowns are obvious. We are in a large Omicron outbreak quickly spreading south from Auckland and Waikato, and we have far too little hospital capacity, but we have high vaccination rates among those who have been allowed to be vaccinated.

The unknown unknowns are always unknowable.

The known unknowns also include things that could easily be known and are known in other places that are dealing with Covid. They are best described as the wilfully unknowable.

I can, right now, find the current wait times at emergency departments across the United States. Premier Health has a handy map showing the wait time at each of seven emergency centres around Dayton, Ohio, so you can weigh up the total time it might take to see a doctor. When I checked, wait times ranged from 2 to 13 minutes – with wait time data refreshing hourly. Virtua Health provides similar data in New Jersey, where wait times range from zero to 97 minutes.

The data is being collected for statistical reporting.

We just cannot see it.

Two weeks ago, Radio New Zealand reported that the average waiting time at Palmerston North Hospital’s Emergency Department over the past three months has been six hours and twenty-two minutes.

Two years ago, the Wairarapa Times-Age reported, after an OIA request, that Wairarapa District Health Board failed to meet Ministry of Health guidelines for nineteen of twenty months leading up to May 2020.

In 2021, Stuff reported that the number of patients waiting more than six hours jumped after the government removed these as DHB targets. The underlying data is still there, but current wait times are unknowable.

We could and should also have a better picture of ambulance call-out times.

The reports are meant to be available on the NASO website three months after the end of each quarter. But the most recent report available is from March 2021, and the page was last updated 22 November 2021.

The data is very likely still being collected somewhere in back-end systems for eventual reporting. But when the real crunch on emergency services hits, you will not know whether an ambulance is likely to be 5 minutes away or 50 minutes away until you need one.

Current emergency room wait times are knowable, as are ambulance response times. Knowing them would be helpful for people trying their best to weigh up risks over the next couple of months.

Regardless of whether you support ED wait time targets for DHBs, knowing whether ED wait times are six minutes, six hours, or sixteen hours can matter in a pandemic – as can ambulance response times. A mountain biking excursion, with no Covid risk, can be a lot riskier if emergency rooms are utterly swamped and ambulances a long way off.

But that information is wilfully unknowable.

More difficult to track, but also important, is hospital-by-hospital capacity. Wellingon ICU co-director Alex Psirides keeps sounding warnings. Nurse-to-patient ratios would be another useful indicator of just how bad things are getting.

Hospitals are downstream from cases. And we no longer have a great picture of case numbers.

The shift to rapid antigen tests after the predictable and predicted collapse of the government’s swab-based PCR testing system means we are also flying blind when it comes to Covid prevalence.

Covid prevalence is knowable, even when swab-based testing fails.

Rako Science provides surveillance testing for private and health sector clients. Because its clients are largely Auckland and Waikato based, its results reflect prevalence in those places. For the past week, positivity rates in Rako’s surveillance testing have been between 3 and 4 percent.

Rako’s testing is not designed to be a random sample of the population – they are just testing for their clients. But it is as close to a random sample as we currently have. And its reported positivity rate is worryingly high. Remember that these are not people turning up to be tested because they have symptoms. They are people who are routinely tested as part of their employment, or because they need to be tested either before travel or for entry into hospital for a scheduled procedure.

That surveillance testing could be broadened, so we would have a representative national picture of how bad things are getting. If caseloads peak in a region, new hospital admissions are likely to peak a couple of weeks later. Knowing prevalence can help the hospitals in planning, and can help each of us in weighing up just how risky things are. 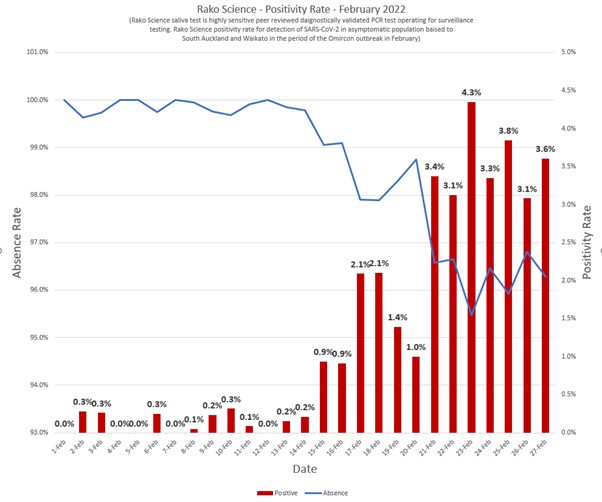 The Government has seemed strangely reluctant to take up saliva-based testing. But there are less accurate alternatives. It is easy to find American data showing Covid’s prevalence in wastewater testing, city-by-city. Caseloads can also be tracked by following wastewater prevalence. So far, wastewater testing in New Zealand has only confirmed whether Covid is present in a sample, rather than tracking its prevalence. At least in this case, it looks like better data will be coming.

We all need to take care of ourselves and each other in the weeks ahead. Weighing risks would be an awful lot easier if there were more known knowns, and fewer wilful unknowns.

Too little method, too much borderline madness

Research Note: Safer arrivals and the path to 2022