In 2010, the National-led government launched a rather substantial experiment. Auckland City’s smaller councils were forced to amalgamate into a supercity structure.

The amalgamation was supposed to bring a lot of benefits, from transport coordination to improved efficiency. A Royal Commission had projected that reduced Council overheads might provide efficiency gains of between $76 million and $113 million per year.

If it had, it would be worth knowing.

The government has proposed amalgamating the country’s water service providers into giant entities under the Three Waters reforms, while promising billions of dollars in savings through efficiency gains.

Earlier this month, the Infrastructure Commission released a superb short report on local government, size, and efficiency. Authors Peter Nunns and Nadine Dodge had wanted to check whether promised gains from amalgamation had borne out in the subsequent decade.

But they found something just a bit disappointing. They write:

“While the Department for Internal Affairs proposed to undertake a post-implementation review of Auckland Council amalgamation to understand the impacts and outcomes of the reforms over the short, medium and longer-term, no such review has been published. It is therefore difficult to establish whether the proposed efficiency gains were realised in practice (Department of Internal Affairs, 2010a, 2010b).”

So twelve years after Auckland’s amalgamation, almost a decade of which was unencumbered by Covid, the Department of Internal Affairs still had not produced a review of a substantial amalgamation project.

It’s an important question. So I had a chat with Peter Nunns about it as part of The Initiative’s podcast series.

New Zealand’s housing shortage is, fundamentally, a toxic mixture of broken infrastructure funding and financing tools, and perverse incentives. Councils bear the costs of growth but see few of its benefits. Consequently, unable to afford the infrastructure to support growth, many have used their zoning and consenting functions to stymie growth in places where they see it as too costly.

If larger councils are better able to deliver infrastructure, at lower cost, or better able to consent housing, then supporters of amalgamation might have an important point. But what if smaller is better?

Nunns and Dodge went to the data.

They found that New Zealand is already heavily centralized compared to other countries, with a much larger fraction of overall government spending coming from central government. They also found that local government is highly consolidated, with far more people per district than is common elsewhere. 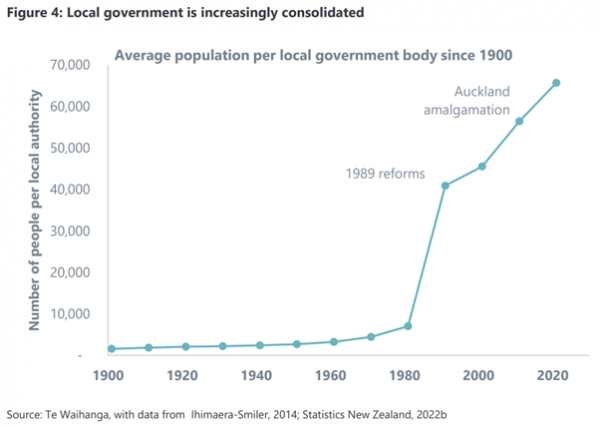 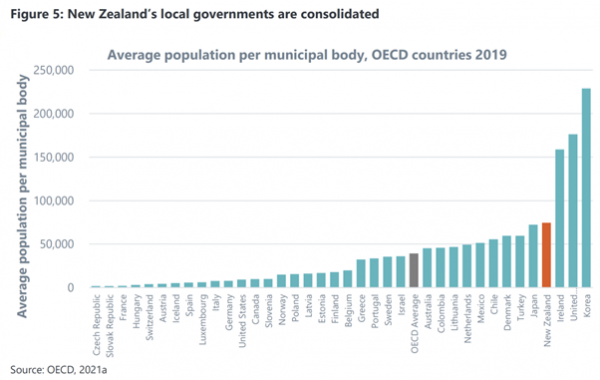 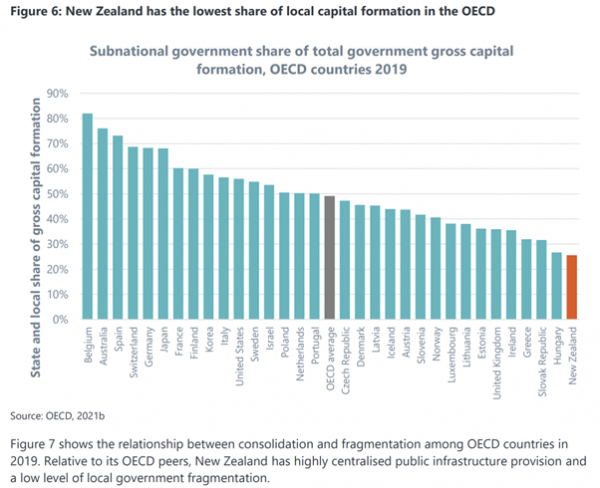 Neither of these are new findings – the New Zealand Initiative released reports reaching similar conclusions almost a decade ago. But truth that is far from common knowledge bears repeating.

More importantly, Nunns and Dodge wanted to test the relationship between council size and various measures of efficiency.

Internationally, they found that centralisation is associated with less efficiency in infrastructure. Larger and denser countries tend to have higher efficiency in delivering infrastructure, as do those in which local government has a larger share of public investment.

Looking within New Zealand, they found no particular reason to believe that larger councils are more efficient than others.

They began with road maintenance costs, which vary considerably across councils. Some spend $50 to $100 per resident per year on roads; others spend up to $650.

But the difference in costs is not driven by council size – or at least not directly. A lot of low-population councils are geographically vast, with large roading networks to support. Population density matters, as does the amount of driving.

When factors like population density and the proportion of sealed roads in a council’s roading network are accounted for, council population size simply doesn’t matter for road maintenance costs. Amalgamating them would be unlikely to deliver efficiencies in road maintenance.

On to the second measure. Issuing building consents seems an obvious candidate for back-room efficiencies. A council that processes tens of thousands of consents per year might simply be better at it than a council that processes hundreds of consents. If there are large economies of scale to be had, we should expect that larger councils would charge less for consent-processing.

There is substantial variability in consenting costs across councils. But those costs seem to have nothing to do with council population. Nothing else in their modelling seems particularly good at explaining those differences either. Not local wages, quantity of consenting activity, population density, nor outsourcing.

I wonder whether some councils charge more than they otherwise might, in order to be able to process consents more quickly. But determining that would take further work.

In any case, if consenting fees reflect council costs in processing consents, there is nothing in the New Zealand data to suggest that amalgamating councils into larger units would deliver efficiencies of scale. 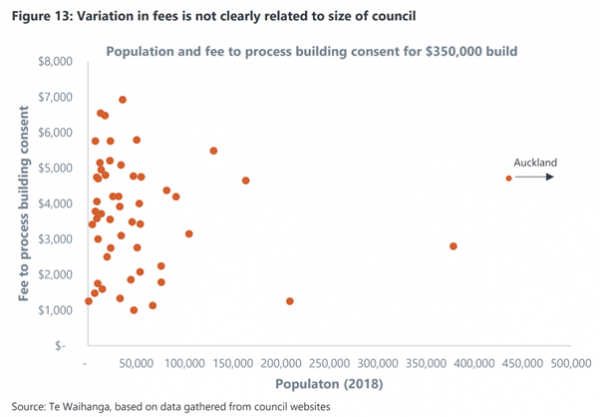 Finally, the authors check whether larger councils deliver efficiencies in true overhead costs: governance, the costs of running elections, and council support services. It would seem to make sense that spreading these largely-fixed costs over more people would result in lower per-ratepayer costs.

But the smallest councils deliver both the highest, and the lowest, per capita costs. 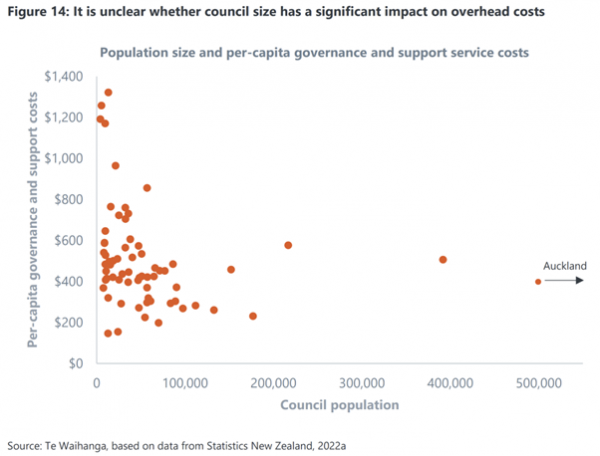 In further work they test whether size matters after adjusting for population density, population growth rates, and other operating costs. They find that larger councils have, if anything, slightly higher per-capita costs – but that the difference is statistically indistinguishable from zero.

In none of the cases could the Infrastructure Commission find evidence of economies of scale in council services. Per-capita costs seem generally unrelated to the number of people that a council serves. Small-population rural councils will have higher costs in delivering road services, but that’s because small population comes with large area. Amalgamating them with larger neighbours wouldn’t change the cost of delivering the roads.

There are important implications.

Too much of Wellington takes as given that bigger is better when it comes to local government, and that only parochial local interests stand in the way of efficiency-increasing amalgamations. But none of the measures here examined found any efficiencies of larger councils at all. And when central government pushed Auckland into amalgamation, promising efficiencies, it could not be bothered to undertake the promised post-implementation review to test whether it did any good.

International evidence, compiled by the Commission, suggests that countries do better when local councils have more, rather than less, responsibility for infrastructure provision.

Central government is currently proposing taking water infrastructure assets away from local councils and putting them into large amalgamated agencies with little accountability. If history is any guide, central government will fail to follow through with any evaluation, after the fact, to see whether it delivered the promised billions in efficiencies.

Podcast: The size and scope of local government and its funding and financing mechanisms

Is local government fit for purpose?