Is local government fit for purpose?

What if the real problem with local government is not that there are too many of them, but rather too few?

Local Government Minister Nanaia Mahuta in April announced an independent review of local government. While its scope is likely to be constrained by the pressing legislative timetables of resource management reform, the review would do well to look back to the reforms that followed the 1988 review of local and regional government.

At least some of New Zealand’s difficulties in getting housing built stem from those reforms.

The Committee on Local Government, in February 1988, released its discussion document, Reform of Local and Regional Government.

It was a lot of local councils for what was then a much smaller country.

But the review also encompassed some 453 Special Purpose Authorities. Things that now fall under general council remit were then carved out into special purpose vehicles.

Perhaps the most notable of the older Special Purpose Authorities is the one that built the Auckland Harbour Bridge.

In 1950, the Auckland Harbour Bridge Authority was established with a remit to build, maintain, and control a bridge from Point Erin to Stokes Point. The Authority was able to issue debt to finance the bridge’s construction, and to levy tolls on the bridge to pay off the bonds and to fund maintenance. The bonds were backed by a government guarantee.

Construction contracts were signed in October 1954, work began in May 1955, and the bridge was completed in April 1959 – three weeks ahead of schedule. Because the works were completed ahead of schedule, workers were paid a bonus. 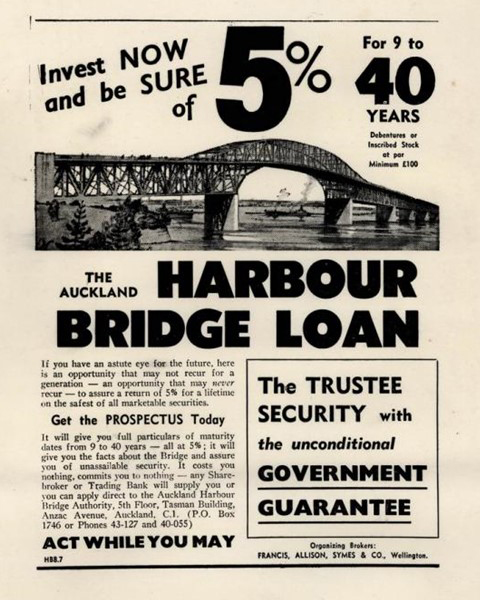 It makes a difference.

Because councils experience urban growth as a cost, rather than a benefit, they use the tools available to contain those costs. Consenting and planning functions wind up being used to manage infrastructure costs. If a project would require an infrastructure upgrade, planning and consenting can help council to prevent that project from going ahead.

It is easy to see why councils resort to blocking growth. When a council is at or near its debt limit, funding infrastructure becomes a problem.

Imagine an infrastructure project enabling new apartment towers to be constructed. If the debt to finance the infrastructure costs $100 million, that project must immediately generate rates revenue of about $40 million per year. If it does not, the increase in council debt will be more than 2.5 times the increase in annual council revenue, and the debt limit will be breached. The limit effectively imposes a 30-month payback period on infrastructure likely to last for decades.

The problem is not that council debt limits are too low. The problem rather is that debt for this kind of infrastructure loads onto the general council balance sheet, rather than being ring-fenced to the project and its resulting revenue stream.

Suppose we instead took inspiration from the Auckland Harbour Bridge Authority and set a Special Purpose Authority for the $100 million infrastructure upgrade. Properties serviced by the infrastructure upgrade would be levied to pay off the debt over a much longer period, and with a much lower annual charge. One set of bonds issued to cover the cost of the Auckland Harbour Bridge came with 9- to 40-year maturity periods – considerably longer than the 2.5 years in which infrastructure now must cover its cost.

The coming review of local government should look back to what was lost in the reforms that followed the 1988 review. We might not need to go back to having 217 territorial authorities. But the Special Purpose Authorities that enabled development prior to those reforms could be part of making housing affordable again.

Closer to the Heart