The Ministry for the Environment’s discussion document suggests a container deposit return scheme as a way of reducing reliance on landfill, reducing litter, and increasing recycling. Of these, only reducing litter is a substantial policy concern. The scheme is extremely unlikely to provide litter-reduction benefits in excess of costs. And, as proposed, it will impose substantial additional risks and burdens.

The Scheme, as proposed, is best described as a mechanism for generating deadweight costs while providing a transfer to waste management companies and reverse vending machine suppliers.

A more direct solution to litter problems may be available. Some of the resource that this document proposes be put to a container deposit return scheme could instead be put to enforcing existing rules around litter. Increased fines are unlikely to be the best solution: increasing the likelihood that littering draws fine or sanction will be more effective than increasing the value of a fine that is rarely applied, and may be even less likely to be applied if the fine is at a level considered to be unjust relative to the magnitude of the offence. Increasing the likelihood of being caught would be more effective. If combined with an option to pay off one’s fine by spending time picking up litter, it could both reduce the amount of litter produced and help remove existing litter.

We suggest abandoning the scheme in favour of greater enforcement of existing sanctions against littering. If the scheme does go ahead, we strongly encourage that any deposit be aligned with Australia to reduce packaging compliance costs and to reduce the likelihood of rorts taking advantage of the artificially-induced difference in price of scrap containers between Australia and New Zealand.

We further suggest that any Scheme be administered by a non-profit, limited-purpose agency, restricted against maintaining surpluses or providing distributions from its revenue, and required to set fees per-material reflecting actual administrative costs. Its governance should include substantial representation from within the beverage industry. 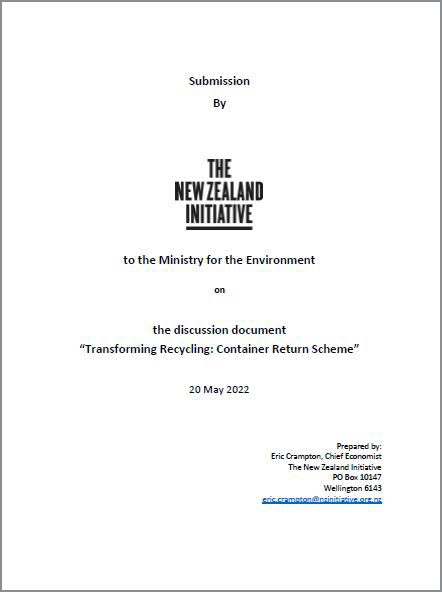