Reports & Media > Reports > Work in Progress: Why Fair Pay Agreements would be bad for labour

The government’s goal of a highly skilled and innovative workforce and an economy that delivers well-paid, decent jobs and broad-based gains from economic growth and productivity, is a laudable aim.

It is what governments should strive for.

However, our research has found that the case for the recommendations of the Fair Pay Agreement Working Group (FPAWG) in pursuit of this goal does not stack up.

The working group recommends reintroducing compulsory, centralised, collective bargaining (described in the working group’s report as Fair Pay Agreements or FPAs). The FPAWG has done its best to create an appearance of a case for its recommendations. But the case put forward is illusory.

Both the evidence and the academic literature suggest FPAs would be likely to harm productivity and would be contrary to the interests of workers, the unemployed, consumers, and overall wellbeing. Rather than advancing the government’s vision of a high-wage, high-productivity economy, FPAs would undermine it.

Unemployment is comparatively low when measured against our OECD peers. Labour market participation rates are among the highest in the world. Wages are tracking productivity growth. And real wages for all wage-deciles have been rising since the labour market reforms in 1991, abolishing New Zealand’s then system of industrial awards.

It should therefore be no surprise that other countries – most notable France under President Emmanuel Macron – have looked to emulate aspects of New Zealand’s flexible labour market regulation.

The FPAWG’s recommendations
The FPAWG proposes replacing New Zealand’s existing labour market regulations with a system of FPAs. This system would allow minimum terms and conditions of employment to be set across whole industries or occupations. An FPA process would be triggered if either a “public interest” test is met, or if the lower of 1,000 workers or 10% of the workers in an industry or occupation are in favour of commencing negotiations for an FPA.

Union representation in negotiations would be compulsory for workers. Employers would have to be represented by industry or employer organisations. If agreement could not be reached in negotiations, a statutory body would determine the outcome for the entire industry or occupation (with only limited, temporary exemptions).

Why the case for FPAs does not stack up
The case for FPAs rests on four alleged shortcomings in the operation of New Zealand’s labour markets. However, our research reveals the concerns are either misconceived or that there is no good reason to believe FPAs will help solve the concerns.

First, it is claimed current labour market settings have seen a decline in the share of New Zealand’s gross domestic product (or “share of the pie”) going to workers. This concern is a myth. The share of GDP going to workers did decline in the late 20th century, but this fall largely occurred in the 1970s and 1980s (at a time when New Zealand had a system of industrial awards similar to the FPA arrangements proposed by the FPAWG). Since the 1991 reforms, the decline in workers’ share of GDP has been arrested and is now trending upwards.

The third concern postulates that the current regime sees “good” employers being disadvantaged by “bad” employers by undercutting them in a “race-to-the-bottom”. This concern is also a myth. The data show that average wage rates have risen faster than inflation across all income deciles.

Workers’ wages are simply not being bid down by employers on an ever-decreasing basis.

The case against FPAs
There are strong grounds for concluding that the FPAWG’s recommendations will be harmful to the well-being and prosperity of New Zealanders.

First, there is a significant risk of slower productivity growth from FPAs locking in inefficient practices and reducing labour market flexibility. These problems will be amplified by the disruption from automation and innovation to the future of work. History also suggests FPAs will harm industrial relations, which will also impact adversely on productivity.

Second, if the FPA process is successful in forcing up wages, there is a risk that FPAs will cause job losses in firms unable to recoup the costs of higher wages from customers. The burden of job losses is likely to fall disproportionately on the unskilled. Higher wage rates will raise the hurdle for the unemployed, particularly inexperienced (i.e. young) and unskilled workers.

Third, the FPAWG’s recommendations will take away workers’ freedom to choose not to be represented by unions in their wage negotiations.

Finally, there is a serious risk of harm to consumers from firms increasing prices for goods and services to recoup increased labour costs arising from FPAs. And the effect of increased prices will be felt most acutely by New Zealand’s least well-off.

Many of the perils of occupation- or industry-wide compulsory collective bargaining were identified in the Terms of Reference for the FPAWG, which asked the working group, where possible, to make recommendations that managed or mitigated these risks. Unfortunately for the government, the working group has completely failed to do this.

A better way
If we want a more productive, higher-wage economy, introducing compulsory collective bargaining across industries and occupations is not the way to achieve it.

Many factors have been blamed for New Zealand’s poor productivity growth, including our small size and geographic isolation. There is little was can do about either of these factors. But that makes it critical we get our policy settings right in the areas we can control. Areas like education, housing and planning, infrastructure, foreign investment, social policy, regulation and the allocation of regulatory decision-making powers between local and central government.

If we solve New Zealand’s policy problems in these areas, the country can confidently look forward to a more productive, high-wage economy.

You can download a copy of the Work in Progress report summary, here.

Response to the CTU "Fact Check"
Shortly after this report was published, we learned that the New Zealand Council of Trade Unions (CTU) had circulated a six-page note that engaged in the statistical debate. We have responded to claims made by the CTU, but not by the working group, about New Zealand's poor labour productivity growth rate relative to the Organisation for Economic Co-operation and Development (OECD) member-country average.

You can download our response to the CTU "Fact Check" here. 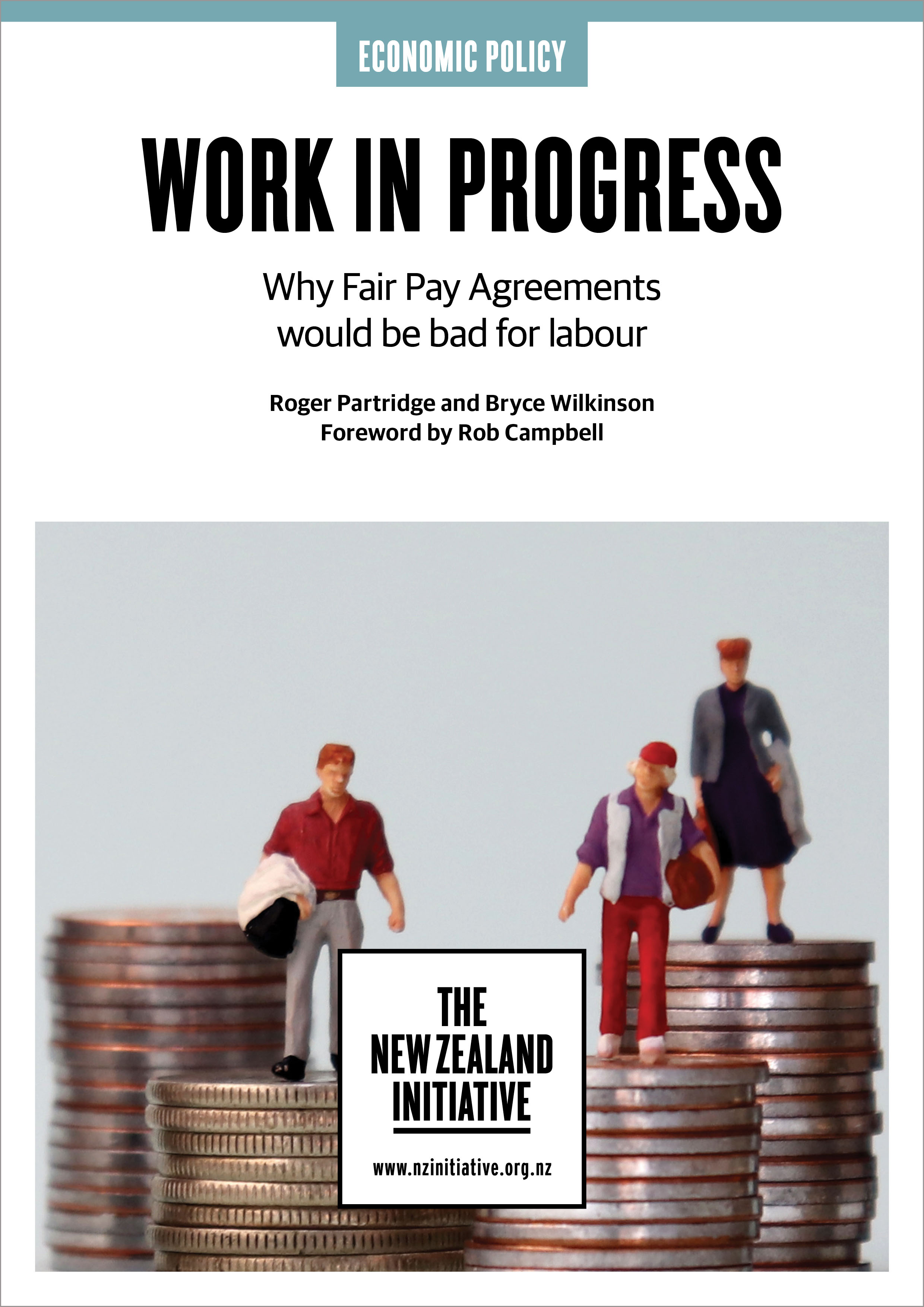 MBIE seats the unions at the steering wheel

Media Release: Back to the drawing board for Bolger’s Fair Pay proposals

Media Release: Back to the drawing board for Bolger’s Fair Pay proposals

Why Fair Pay Agreements would be bad for labour

Labour market regulation – a case of devil take the hindmost

Should we give Fair Pay Agreements a fair go?