Reports & Media > Reports > The Future Catch: Preserving Recreational Fisheries for the Next Generation

The Future Catch: Preserving Recreational Fisheries for the Next Generation

Hundreds of thousands of New Zealanders fish recreationally each year in inshore waters. Fishing is integral to the Kiwi way of life.

But many fishers are concerned about the low abundance (biomass) of some fisheries. Another concern is that access to fisheries we once took for granted is increasingly under threat.

The first report in this series, What’s the Catch? The State of Fisheries Management in New Zealand, highlighted that New Zealand has directed the majority of management attention and research to commercial fisheries. In so doing, too little attention has been directed at improving the fisheries that are important to recreational fishers.

The first report concluded that if changes are not made to the management of recreational fisheries, New Zealanders can expect increasingly stringent constraints on their access to fisheries resources. And, even then, we risk the type of catastrophic depletion that has too often characterised the recreational fisheries in other coastal nations.

Indeed, this level of depletion has already occurred in the blue cod and scallop fisheries in the Marlborough Sounds, the rock lobster fishery in the Hauraki Gulf and the finfish fishery in Hawkes Bay.

The second report in the series, The Overseas Catch: The State of Recreational Fisheries Management Abroad, provided useful examples of how other nations have grappled with common problems associated with population growth, coastal development and increasing tensions and conflicts between competing fishing sectors.

Western Australia’s Department of Fisheries was particularly impressive in its handling of increasing demand for recreational fishing and resulting conflicts with commercial fishing.

Following up on this research, in May 2017, the New Zealand Initiative and the US-based Environmental Defense Fund took a group of New Zealanders involved in recreational, commercial and customary fishing to learn more about Western Australia’s experience.

We left inspired that many of the lessons learnt in Western Australia and elsewhere can help us formulate recommendations.

This third report, released for consultation, The Future Catch: Preserving Recreational Fisheries for the Next Generation examines these lessons and provides an opportunity for New Zealand fishers, the wider public and policy makers, to engage and comment on the Initiative’s policy recommendations.

Recommendations
Our first recommendation is for the Government and all fishing sectors to work together. They need to show commitment to constructive and effective management of shared fisheries, where all sectors have an interest in catching more fish, but value their share of the catch quite different.

To address the historical imbalance in management attention and research, we recommend integrating recreational fisheries into management policies and processes. This can be accomplished by:

We also recommend switching the basis for allocating a total allowable catch (TAC) of a fishery between fishing sectors. Currently, the Minister has full discretion, which incentivises the sectors to compete for more favourable allocations. With secure allocations in place, there would be incentives to collaborate to improve a fishery for the benefit of all sectors.

This recommendation includes developing a process to reallocate a TAC over time as social values change. It is important that this process benefits recreational fishers and compensates quota holders where they have a case for unjustified losses.

We have identified some intriguing ways to fund these recommendations, starting with the excise duties paid by recreational boat users.

New Zealand recreational fishers pay tens of millions of dollars in petrol excise duties to fund roadbuilding but get little back to maintain their fishing experience.

All recommendations are intended for one purpose, to ensure that recreational fisheries are preserved for the next generation.

Next step
The Initiative will hold meetings throughout the country during August and September 2017. We want to hear the public’s views so we can bring about the type of change that has their support.

After this consultation, the recommendations will be finalised and presented to the new government by the end of the year.

It is vitally important the final recommendations are met with political will. It will take some tough decisions to preserve recreational fisheries for the next generation while upholding the secure rights associated with quota holdings and Treaty obligations.

Visit the Fisheries Project page for more information about the consultation and public roadshows around New Zealand. 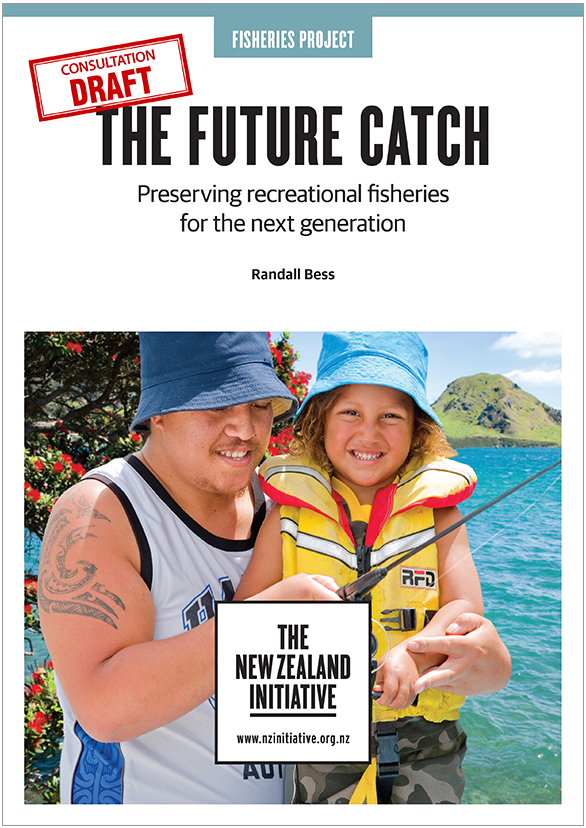 Media Release: Money no excuse for the Government to not protect recreational fisheries ​

The Overseas Catch: The state of recreational fisheries management abroad

What's the Catch?: The state of recreational fisheries management in New Zealand