Reports & Media > Reports > Research Note: Doing whatever it takes with someone else’s money

Research Note: Doing whatever it takes with someone else’s money

New Zealand is now on a dangerous path to higher public debt and unprecedented money printing with no credible plan for unwinding the situation before the next crisis, warns a new report by The New Zealand Initiative.

Covid-19 and the various types of lockdown responses have caused many governments to go even more heavily into debt and print money to sustain asset prices with borrowed money. Some governments and economists are taking about talk about printing money to a novel and alarming degree.

Report author Dr Bryce Wilkinson said in Doing whatever it takes with someone else’s money that during the 2008 Global Financial Crisis (GFC), Australia and New Zealand managed to avoid increasing public debt to imprudent levels and kept their central banks' interest rates at or above 2.5%.

By contrast, the wealthiest countries on the planet like the US, UK, and Europe increased their net government financial debt to well over 50% of GDP and set central bank interest rates below 1%. They also printed money.

Normality was not restored before Covid-19 appeared and they are now doubling up on lowering interest rates, increasing public debt, and injecting trillions of dollars into the global banking system.

“While some recourse to deficit spending is understandable, the worrying aspects are general absence of meaningful cost-benefit assessments of the funds being committed and the lack of a credible plan for reversing the excesses before the next crisis hits,” Wilkinson said.

The report warns that some proposals would undermine the roots of New Zealand’s fiscal and monetary constitution – particularly central bank independence from politics when implementing monetary policy.

The report highlights concerns that asset prices internationally are now being set on the basis that profits are to be privatised while taxpayers should bear the losses. New Zealand governments cannot stop that happening internationally, but they should stop Kiwi investors from developing that expectation,” said Wilkinson.

Wilkinson said policies that penalise thrift and prudent investing to reward borrowers and imprudent risk-takers are dangerous and should be avoided to the greatest extent possible. Bankers and investors should not expect to have their losses soaked up by taxpayers.

The report questions the cost-benefit case for the RBNZ to purchase up to $60 billion of government bonds with borrowed money and the current monetary policy framework that requires it to lift lower rates if inflation towards the middle of the 1-3% range when it is not clear that low rates are imposing any social cost on the community.

It also suggests that the implementation of monetary policy may be putting too little emphasise on the need for ongoing financial market efficiency and stability.

“The bottom line is that only proper justification for any policy is whether the benefits to the public outweigh the costs. We are not seen enough evidence that this is the case,” Wilkinson said. 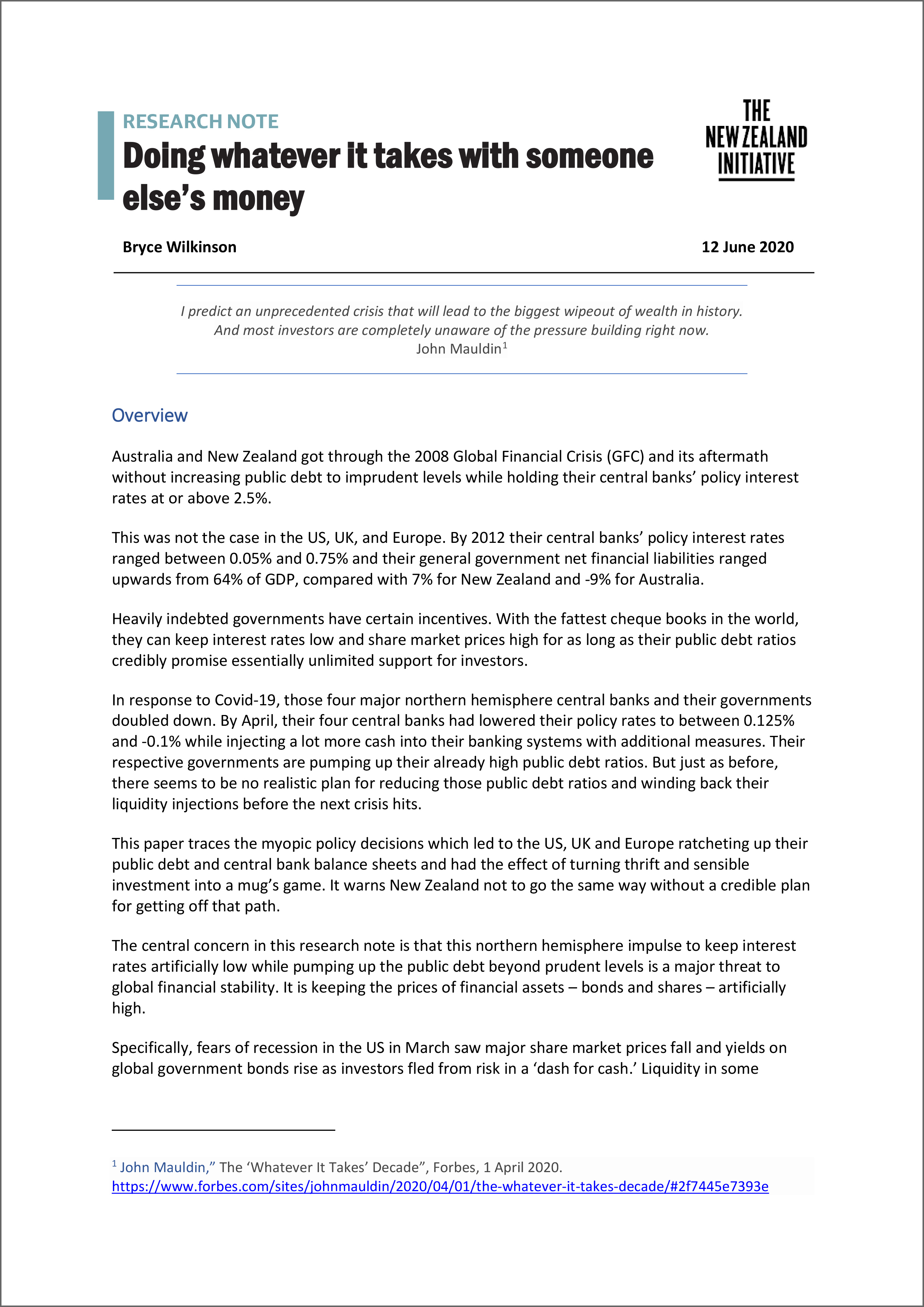