Singapore has set a high standard for dealing with Covid-19 and despite its decision to enter a lockdown this week, New Zealand can learn a lot from the country, according to a new report Lessons from abroad: Singapore’s Covid-19 containment model from the New Zealand Initiative.

Although Singapore has enacted a “circuit breaker” lockdown to defend against some new sources of coronavirus, it could make this choice due to its earlier efforts to identify, control and contain the pandemic threatening its territory.

Neither country is yet through the worst of the pandemic, but speedy government action helps explain both countries’ relatively low case rate.

“Singapore's main point of difference was its early and aggressive border security measures. Its first line of defence restricted travel from countries profoundly affected by the coronavirus, such as China, despite the World Health Organisation not recommending travel restrictions at the time."

“It has also implemented one of the world’s most restrictive quarantine measures, including digital surveillance tracking systems to monitor those possibly infected with the virus,” Hong said.

While many countries encourage citizens to self-isolate to slow the spread of the virus, they find it tough to enforce those commands, particularly when the rules have not yet become laws.

However, Singapore authorities have already issued hefty fines for some individuals not complying with quarantine rules, and even repealed the work permits and visas of others.

“The Singapore government has taken a 'no-nonsense' approach when enforcing its rules by using excellent technological surveillance and harsh penalties,” Hong said.

He added that Singapore is rigorously conducting and boosting its testing regime to be one of the highest per capita rates in the world, although its rate is still slightly below New Zealand’s.

The city-state’s tight border and screening protocols also give the government greater visibility into which people encounter possible Covid-19 cases. It has created 20 dedicated Contract Tracing teams, under the jurisdiction of the police, to locate and monitor at risk individuals.

The teams are using a new, publicly available mobile software app to help warn citizens when they might be in proximity to infected people. The free source code for the app will be opened up for other countries to adopt.

“New Zealand’s government decided to enact a lockdown 26 days after its first case on February 28. By comparison, Singapore took 75 days since its first case on January 23 to enact its ‘circuit breaker’ phase showing that some of its earlier measures for containment were effective,” Hong said.

“Singapore’s early containment policies were a model for the world that the right policy decisions could make significant differences to the problems of Covid-19. New Zealand should keep an eye on what it does next.” 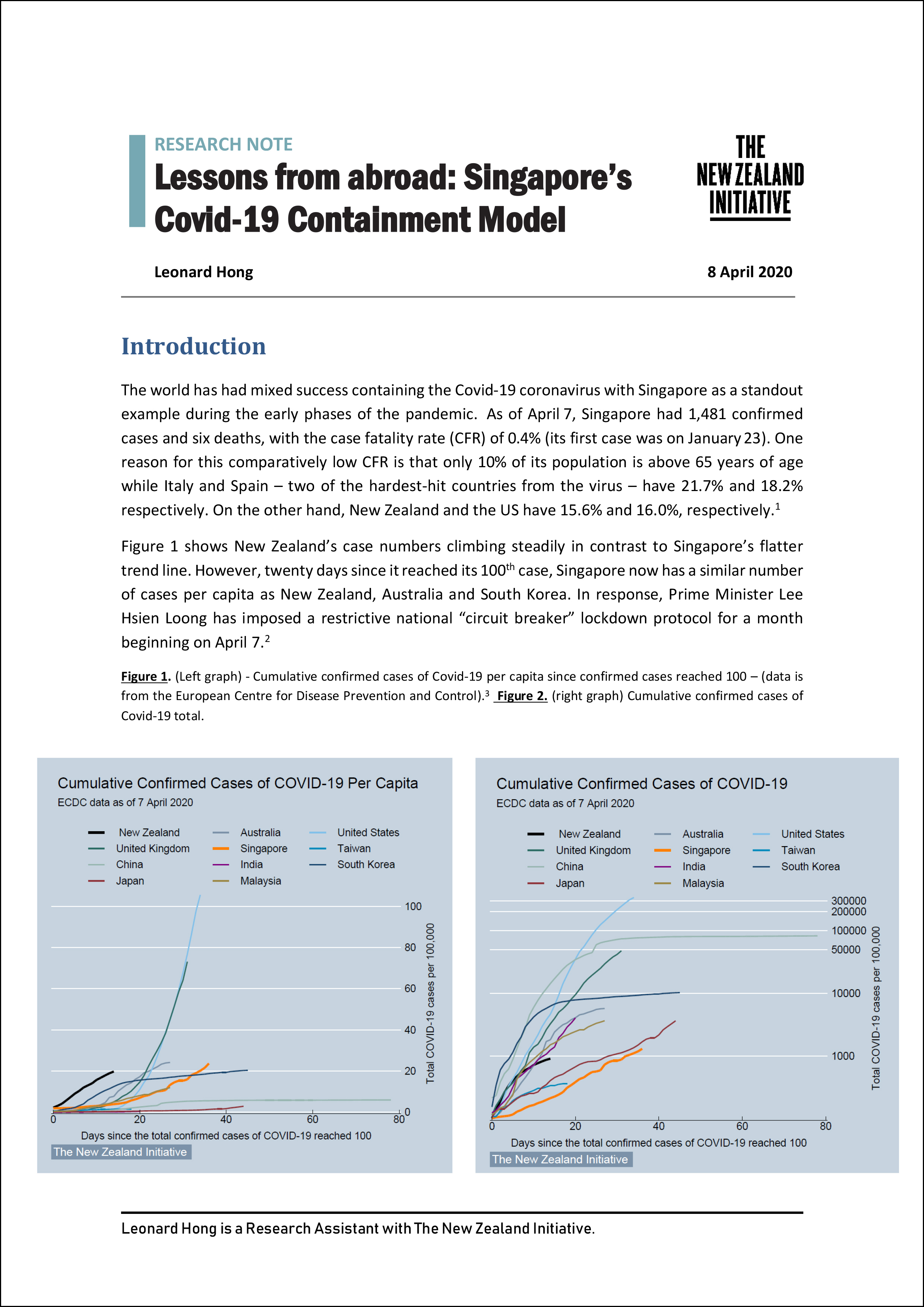 Podcast: Eric Crampton on safety measures ahead of the opening of the trans Tasman bubble