Reports & Media > Reports > Fit for Purpose? Are Kiwis getting the government they pay for?

Fit for Purpose? Are Kiwis getting the government they pay for?

This report looks at how good a job government is doing with all the tasks entrusted to it. The issue is important because government has come to command much of our resources.

Taxes in New Zealand have risen four times faster than incomes in the 20th century. Taxes now take more of our income than in almost any country outside Europe. We have become a high tax country.

We, the public, need the government to spend our tax money well.

Government is a dominant provider of many activities, including health and education. Poor performance here would harm current and future New Zealanders.

Government also dictates much resource use through ownership and regulation. It is a major landowner, and there are 50 times more Parliamentary Acts now than in 1908.

It should aim to get the best possible outcomes for New Zealanders from its assets. It should also regulate wisely and administer those regulations well.

The report’s focus on value for money is not ideological. Who would not want to see government doing the best possible job for New Zealanders?

Perhaps, one-third of New Zealand government spending is wasteful. That represents around 13% of GDP, or $20,000 per household, annually.

A 2009 OECD report similarly assessed spending efficiency in school education. The indicated level of waste in New Zealand spending on education was one dollar in six.

Less waste would mean more money to improve outcomes. Currently, around 17% of 15-year-olds can barely read. The government has likely spent more than $130,000 on each of their schooling. Few would regard this as an acceptable outcome.

In health, even official reports acknowledge a lack of focus on productivity. The OECD has also assessed the efficiency of health spending across member countries. A 2010 report indicated that New Zealand could spend 2.5% of GDP less a year for similar outcomes. Of the order of one dollar spent in four looks like waste.

Such findings from international comparisons are only motivational. They do not show what New Zealand would need to change or whether such changes are plausible. Their value is in inviting us to learn from countries that seem to be doing better.

How well is the government doing as a regulator?
The Crown’s performance as a lawmaker and regulator is flawed. There is widespread dissatisfaction among regulators with the quality of the law they have to administer. The statute book has become too prescriptive and too detailed. Parliament cannot hope to keep it up to date and fit for purpose.

It needs to be easier for lawmakers to resist the pressures to legislate poorly. Greater reliance on simpler laws of a more general nature is desirable. Prescriptive law quickly becomes out of date. Change is unlikely as matters stand.

What about our high international rankings?
Many international agencies assess countries’ outcomes for aspects of wellbeing and economic performance. New Zealand enjoys top-tier world rankings in many of these measures.

Does this mean government is doing a great job? Yes, and no.

We rank among the best for many but not all aspects. The report identifies 20–30 government-dominated areas of weakness. Some are no surprise. These include overseas investment and aspects of labour market laws. Infrastructure quality is another weakness.

More surprising is the weakness in our legal system. We rank poorly in the ease of enforcing contracts and resolving insolvency and the quality of judicial processes.

There is no excuse for our 54th ranking by the World Bank for the quality of our judicial processes. Gallingly, Australia is ranked first.

The bottom line is there is compelling evidence of much government waste. It is occurring for many reasons, but a major symptom is a lack of focus on efficiency.

Those options are outside the scope of this report. The first task is to achieve the savings.

Click here to download the two-page report summary of Fit for Purpose? Are Kiwis getting the government they pay for?


About the author
Bryce Wilkinson is a Senior Research Fellow with The New Zealand Initiative and Director of Capital Economics Limited. He is the author of many articles and reports relating to the performance of the State and how it might be improved.
These include: Constraining Government Regulation (2001), Restraining Leviathan (2004), Guarding the Public Purse: Faster Growth, Greater Fiscal Discipline (2014) Capital Doldrums: How Foreign Investment is Bypassing New Zealand (2013), Open for Business: Removing the Barriers to Foreign Investment (2014), and A Matter of Balance: Regulating Safety (2014).

Bryce was a member of the government’s Regulatory Responsibility Taskforce and the 2025 Taskforce. He holds a PhD in economics from the University of Canterbury, was a Harkness Fellow and is a Fellow of the Law and Economics Association of New Zealand. 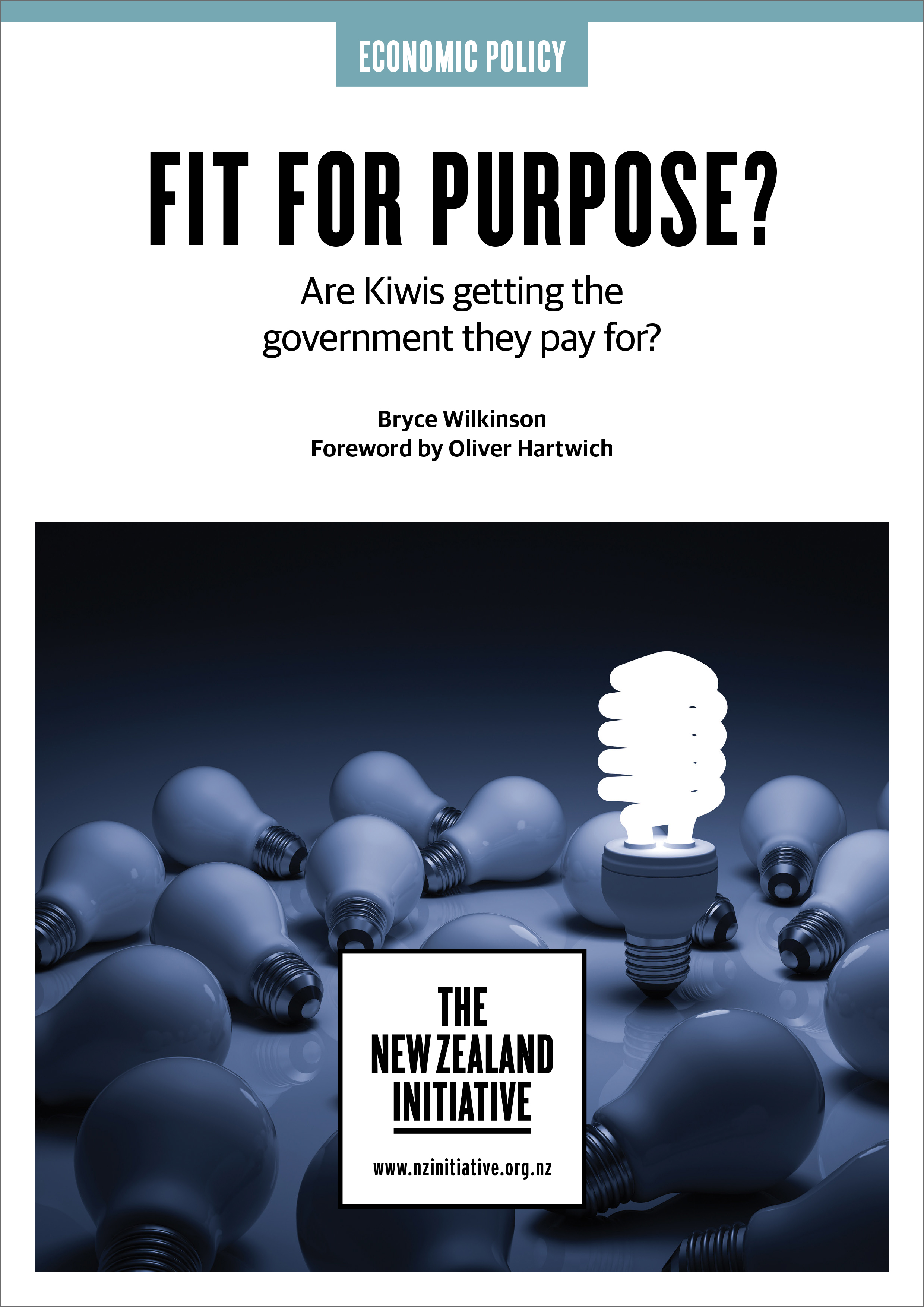 Fit for Purpose? on TVNZ Breakfast