Reports & Media > Reports > Embracing a Super model: The superannuation sky is not falling

New Zealand is one of a handful of countries to offer a universal non-means-tested benefit, payable from the age of 65 until death.

Commentators insist that with an ageing population, New Zealand Superannuation (NZS) is unsustainable. There are rising concerns that New Zealand is sitting on a fiscal time-bomb, and that urgent reform to NZS is needed.

Contrary to the doomsayers, this report offers a more positive story. Not only is NZS arguably one of the best pension models in the world, but the best evidence does not point to a looming fiscal crisis.

Any changes to NZS ought to preserve the best parts of the model, while ensuring NZS adapts to a changing environment.

There is a lot to like about the NZS model:

The sky is not falling

• The cost of NZS will rise from around 5% of GDP in 2015 to 8% in 2060, but that does not necessarily mean that NZS (even NZS at current settings) is unaffordable.

• Changes will need to be made to spending and/or taxes but the size of the adjustment is not yet known.

• Expected tax revenue is still unknown, including future taxes paid by superannuitants. Premature tax increases to address the future fiscal burden can cause harm if policymakers get the estimates wrong.

• There is still uncertainty regarding future social expenditure, ranging from 22.5% of GDP to 35%. Much of this uncertainty is due to unknown future unemployment rates, labour force participation rates, and productivity growth.

• Future rates of productivity growth are not only unknown, but also have a significant effect on the affordability of NZS and every other component of government spending.

Taxing the working poor to pay the relatively wealthy

• Just because we can afford NZS now does not mean it will be the best redistribution of resources in the future.

• Unnecessary increases in taxes could cause harm, as could cuts to essential public services.

• In the face of ageing voter demographics, governments will face more difficulty convincing the electorate to make changes to NZS.

• Public spending on NZS could increasingly become a tool for regressive redistribution, transferring funds to the relatively well-off. The opportunity cost must be considered where other groups face greater hardship and/or need.

• According to one calculation, by 2060 the net fiscal impact of having more net recipients of public spending (predominantly superannuitants) than net taxpayers, could be around negative $15 billion.

• Changes to NZS should preserve the best parts of the model, while ensuring that NZS does not distort the welfare system’s overall progressive redistribution.

• The pension age should rise, but a one-off rise that with a long lead-in time is likely to already be out of step with labour force trends by the time it is implemented.

Recommendation 2: Index NZS to CPI only rather than both CPI and wages

• This report makes this recommendation with the assumption of continued real median wage growth, which is why this report also recommends focusing on productivity growth.

• Though the benefits of enhanced productivity growth will not be shared under this setting, it is down to value judgments to determine whether NZS should provide for these enhanced benefits or whether private savings should be expected to fill this gap.

Recommendation 3: Contributions to NZ Super Fund should not be at the expense of paying down debt

The Super Fund should not be relied on to reduce the future costs of NZS (it cannot do that), and contributions to the Fund should not come at the expense of paying down debt.

Recommendation 4: Productivity growth will make NZS – and everything else – more affordable

Faster rates of productivity growth relative to increases in the real interest cost of government borrowing can allow increased government spending without falling into a public debt spiral. Raising productivity growth is a way of making NZS (and everything else) more affordable, and gives future governments more options and flexibility to adjust to changing economic and political circumstances.

Not a new problem, not a bad problem

Since its inception, the New Zealand public have debated the purpose of the public pension and who should receive it.

But signalling small changes that can make a measurable difference, and signalling these changes well in advance, increases the likelihood that the policies made today will stick.

Click here to download the two-page summary of Embracing a Super model: The superannuation sky is not falling.


About the author
Jenesa Jeram is a Research Fellow at The New Zealand Initiative focusing mainly on social issues, welfare and lifestyle regulations. Since starting at the Initiative as a research assistant in 2013, Jenesa has written and co-authored many reports on a range of topics.

She has a Bachelor of Arts with first class Honours from the University of Otago, majoring in politics, philosophy and economics. 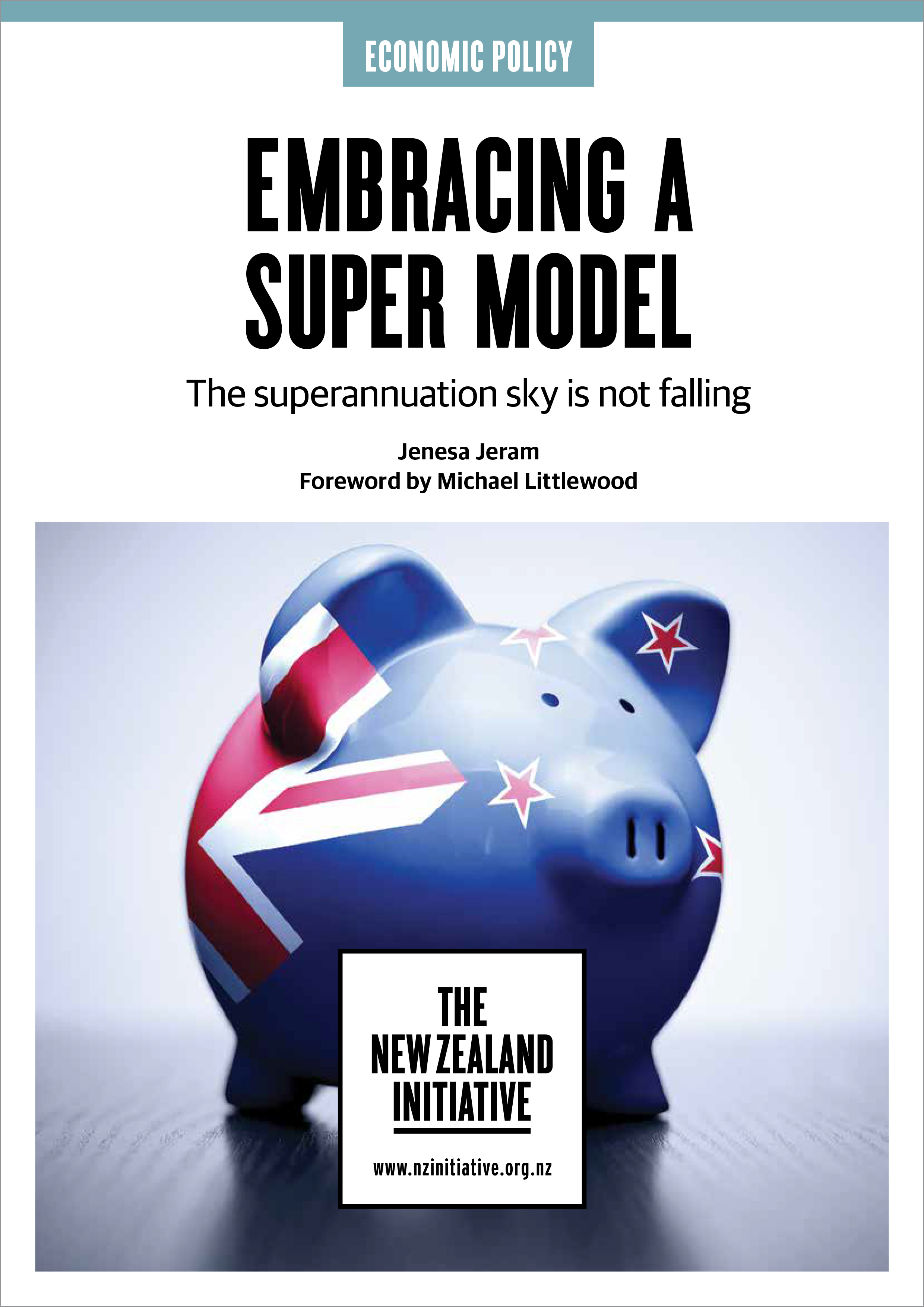