Reports & Media > Opinion > If Medsafe won't lead, it needs to get out of the way

If Medsafe won't lead, it needs to get out of the way

On Friday, 17 June, the American Food and Drug Administration approved the Moderna and Pfizer vaccines for children over the age of 6 months. The Centres for Disease Control recommended the vaccines the next day. And vaccination of under-5s began last week.

Vaccination for under 5s is not likely to start in New Zealand for months. Our regulatory systems are failing us.

On FDA approval, American doctors reminded everyone that while Covid presents lower risk for children than for adults, the risk is still very high.

Consider the other diseases for which children are regularly vaccinated. The US Centres for Disease Control did when making their decision.

In the two years before the chickenpox vaccine was approved, chickenpox hospitalised 29 to 42 of every 100,000 children aged 0-4. The burden of chickenpox was enough to warrant vaccine approval.

Or to put it another way, when the chickenpox vaccine was approved, chickenpox was sending half as many kids to hospital as Covid currently does. 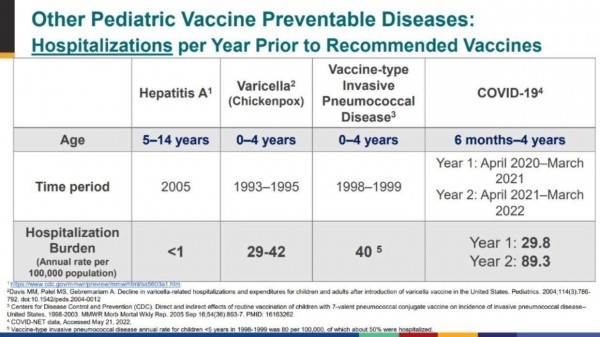 On average, since January 2020, Covid has been killing 86 American under-5s per year.

It is tragic for every single family, but 86 doesn’t sound that large relative to the US population – until you remember that the Rotavirus vaccine was approved when rotavirus was killing only 20 under-5s per year.

Covid is killing four times as many kids as were being killed by Rotavirus when the Rotavirus vaccine was approved. 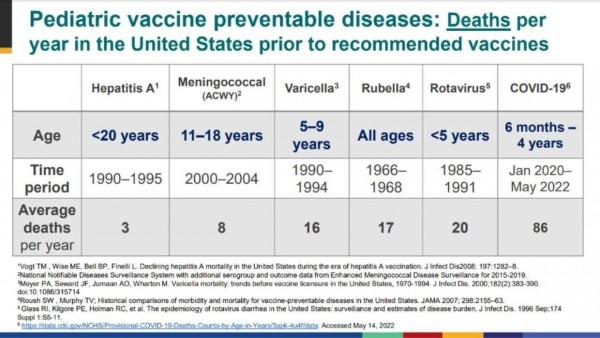 The US Food and Drug Administration has hardly been speedy about approvals. Two doses of the light-dose under-5 Covid vaccine were safe but were not particularly effective. Rather than start getting those doses in arms months ago, in anticipation of the third dose getting the job done, approval of the entire sequence was delayed.

Delays in starting a three-dose sequence mean lengthy delays in being protected.

But as slow as the FDA has been, things are far worse in New Zealand.

On Thursday, I asked Medsafe whether either Moderna or Pfizer had applied for approval for their under-5 vaccines.

A Ministry of Health spokesperson said that while the New Zealand government “continues to monitor developments in the COVID-19 vaccine space… no application for a Covid vaccine for under-5s has been received by Medsafe from Pfizer at this stage. If an application is received in future, it will be assessed as a priority.”

They also confirmed that no application has been received from Moderna.

Covid has not had to seek Medsafe approval to infect under-5s.

Official New Zealand statistics group under-5s into a broader 0 to 9 age group, so it is hard to tell how many children aged six months to 5 years have been hospitalised with Covid.

The government will blame the drug companies for not having sought Medsafe approval, but the problem is the process.

Moderna’s vaccine for under-5s is under review in Canada and in Australia, but not here.

The reason is obvious.

New Zealand approval is not worth the effort unless our government signals that it wants to buy doses. Imagine committing specialist staff time to dealing with Medsafe, instead of a larger country’s agency, only to have the New Zealand government sole-source supply from the other manufacturer.

New Zealand goes to the back of the queue.

Kiwis can be awfully precious about insisting on local bespoke regulatory approval processes – and drug approvals are hardly the only example. It makes little sense when larger countries’ regulators are better resourced. And the cost of our preciousness isn’t ultimately borne by big companies. It’s borne instead by every single child who cannot access a vaccine and winds up very sick instead.

In a pandemic, these kinds of delays are simply too costly – whether for vaccines for under-5s, or for Omicron-specific boosters from Pfizer and Moderna that will be ready in perhaps three months.

If Medsafe won’t lead, it should do the decent thing and get out of the way.

Burden of proof is on Medsafe to justify its existence