Families who spend less on housing can spend more on food

Bryan Perry’s regular reports for the Ministry of Social Development represent some of the very best that New Zealand’s public sector has to offer.

Statistics New Zealand runs the surveys on household income and household expenditure. But it’s Perry’s reports that make sense of them.

It showed that child poverty has been steadily reducing since about 2013 and, depending on the measure, is now either below or substantially below child poverty rates from before the Great Financial Crisis.

It puts New Zealand in international perspective, showing that material deprivation rates here are higher than those in the Netherlands, similar to those in Germany, and well below those in France, the UK, and Spain.

And it raises important questions about the reliability of data about some households showing up in administrative data as having very low incomes.

Spin machines revved up quickly, trying to find the least indefensible ways of using the data to support whatever position they had before they’d opened the report. Retired Auckland University sociologist Peter Byrd Davis cut through much of the nonsense, noting that “No matter what govt achieved, it would not be enough for the lobby groups. And that is their job.”

But whatever your views on where policy should move, a shared understanding of where we are matters. Perry’s reports provide that bedrock, piercing common misperceptions.

Material hardship is one of the better measures of child poverty. Surveys ask whether households and the children within them do without things like shoes that fit, waterproof coats, separate beds, fresh fruit and vegetables daily, or being able to pay for school trips. 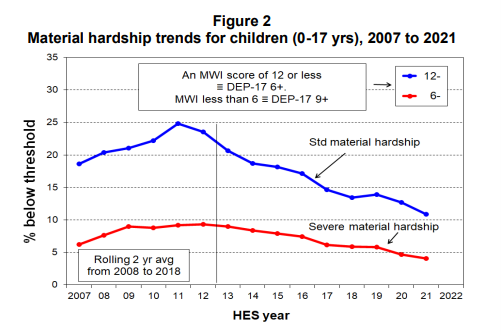 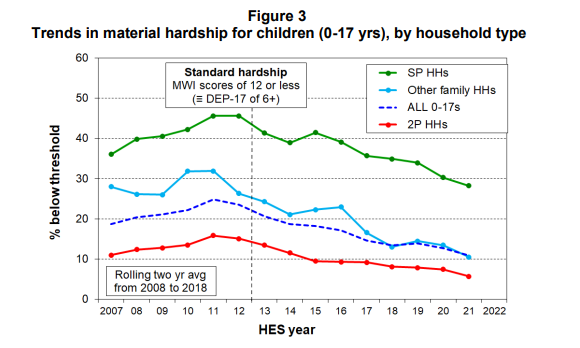 So Perry warns against a common misperception that “New Zealand has a high child poverty rate”. On the standard measures, New Zealand’s child poverty rates are slightly above those in the median European country, so our rate is not high in international comparison. And as the rate has been steadily declining, it is also not high relative to recent history. 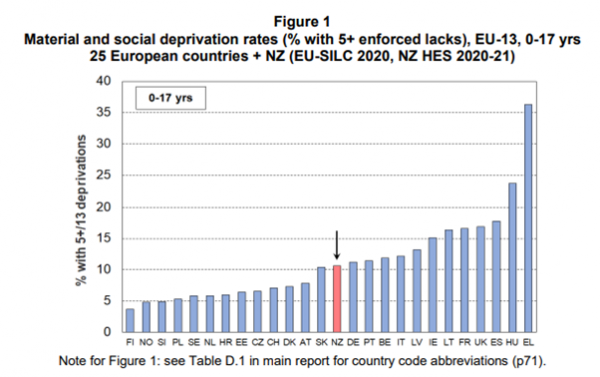 He also warns the view that “paid employment is (usually) the best way out of poverty” can also mislead. Many families, though fewer families than a decade ago, struggle despite predominantly earning income through work rather than benefits. He notes that about half of children in households facing material hardship come from working households. And Working for Families boosts incomes and reduces hardship among many working families.

But other aspects of the report may be less surprising.

Material deprivation rates are also higher for children with many siblings. Among children in two-child households, 10% meet the 6+ hardship standard. But 27% of children in households with four or more children do.

Perry’s report provides the most comprehensive detailing of New Zealand’s child poverty statistics, but I still wished it were possible to slice the data in different ways.

It would be impossible for any report to provide every different way of tallying the figures. But other countries’ statistical agencies have made it simpler for ordinary citizens to interrogate their own data in these kinds of ways. New Zealand has not, which makes us more reliant on expert reports like Perry’s.

I was struck by the combination of a few things in this latest report. Together, they point to housing’s continued role in child poverty – though I hope I am not shoehorning Perry’s report into my own prejudices.

There has been a substantial increase in the proportion of two-parent households with two full-time earners, rising from about 40% of households to almost 50% over the past decade.

Median household incomes have risen, even after housing costs, and child poverty has fallen.

But average housing costs, as proportion of household income, have been reasonably flat. 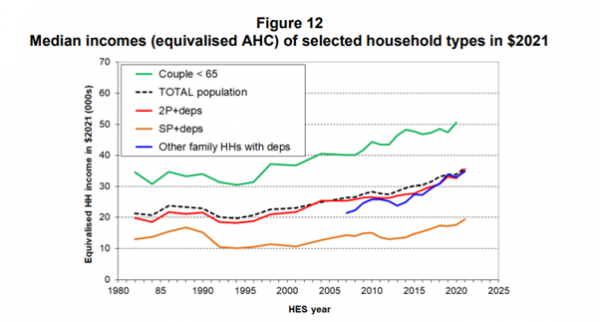 After-housing-cost incomes have risen, but at least some of the shift to having two parents in full-time work will have been a race against house prices.

Increased labour force participation can be superb if it represents the removal of barriers and fulfilment of aspirations. But it can also be a consequence of families bidding against each other for scarce housing near employment, where a family might otherwise have preferred that one parent only work part-time.

The surveys do not tell us what proportion of households fall into each category. But policies enabling more housing in places where people want to live would improve housing affordability and make more choices possible.

If fewer households in the bottom 20% had to spend more than 40% of their income on housing, they could afford to spend more on other things - like shoes that fit, waterproof coats, separate beds, fresh fruit and vegetables daily, and school trips. And fewer households would have to rely on transfer programmes like Working for Families to make ends meet.

Perry’s reports provide a sharp contrast to others more advocacy-based work. While Perry clearly cares deeply about alleviating poverty and hardship, his foremost concern is being true to the data and avoiding the kinds of exaggerated claims elsewhere used to justify policy.

Kudos to the Ministry for Social Development in enabling this kind of work.

How do we measure child poverty?

The media fails to offer a critical eye on child poverty