Don’t know much about history?

It does not happen every day that I find myself in agreement with the Ministry of Education. But their reasoning for introducing a New Zealand history curriculum is sound.

Many young people “haven’t learned where we have come from,” the Ministry writes on its website. It explains that “understanding the past will help to shape the way we move forward into the future.”

The former statement is true, while the latter is a truism.

Its lament on students’ ignorance of history is understandable, but the Ministry is also partly to blame.

In the New Zealand Curriculum, the entire social science curriculum (which includes social studies, geography, history and economics) fits on a single A4 page – for all years of school.

It is therefore laudable, in principle, that the Government has decided to spell out what Kiwi students should learn about their country’s past.

Introducing a New Zealand history curriculum was always going to be controversial. Historian and former Labour cabinet minister Michael Bassett has pointed out that important elements of New Zealand history were absent from the draft. National’s education spokesperson Paul Goldsmith, himself a trained historian, opined the proposal was “lacking in balance and needs revision”.

In our schools, general history is not taught systematically. Certainly not at the primary and intermediate stages of education, and it is possible to largely avoid the subject at secondary school. You can spend 13 years at school without ever encountering the Roman Empire, the Ming Dynasty, the American Revolution, let alone the Cold War.

For young New Zealanders without knowledge of such past events, the world must be a bewildering place. Even with a compulsory New Zealand history curriculum, knowing New Zealand’s place in space and time would be hard. How could you understand the turning points which shaped humanity’s fate, the ideas that formed our societies and the people who promoted them?

If this sounds too abstract, let’s illustrate it with a few examples.

The late British economic historian Angus Maddison dedicated much of his life to documenting the prosperity of the world over the past two millennia. Thanks to his research, we can reconstruct how GDP per capita increased since Roman times.

The remarkable thing about economic progress is how little there was for most of human history. From ancient times to the 1700s, hardly anything changed.

The Roman Empire expanded and then fell, the Middle Ages began and ended, the Reformation and the Renaissance occurred: yet economic output per capita barely moved. As Thomas Hobbes put it, life remained “nasty, brutish and short”.

But then, from the 18th century, the world witnessed an explosion of prosperity. Starting in Britain, then spreading through Europe, the British colonies and America, rapid growth and a hitherto unknown increase in living standards occurred (see graph). 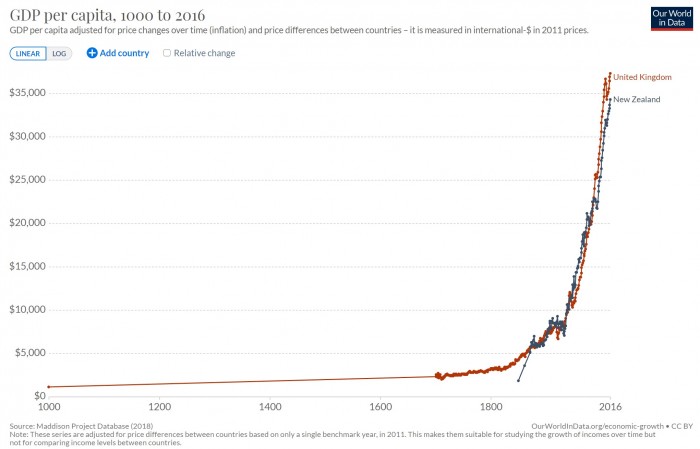 How would one make sense of this development with no historical background?

If you are unfamiliar with history, you would not imagine just how unusual the past three-hundred-odd years have been. Homo sapiens appeared around 200,000 years ago. The first great civilisations in Mesopotamia date to the 4th millennium BC. But only the past 20 to 30 generations experienced rapid progress. Not just in economic output but in health, life expectancy and literacy as well.

Without historical knowledge, students would not have any chance to understand what suddenly sparked this development. Nor would they understand why it all took off in the most unlikely of places: that small, cold and often rainy island in the North Atlantic.

Even with such knowledge, there are competing and complementary explanations. Was it the Enlightenment’s focus on reason and the scientific method? Was it technological progress, the invention of the steam engine and the use of fossil fuels? Was it the development of contract and property law which enabled a greater division of labour?

All these factors (and some more) have played a role. School history is not about presenting a single definitive answer but meant to enable students to think about the past while establishing links and drawing comparisons with the present.

Only non-historians would believe that history is just about the past. History can teach us many lessons about our own time. If we let it, it provokes us to see ourselves differently.

Take, for example, the perennial question of inequality. Louis XIV (1643-1715), the French “Sun King”, was famous for his lavish lifestyle. If he met the richest person on the planet today (currently Amazon founder Jeff Bezos), what would impress King Louis?

However, it could also be that billions of other people, too, have access to the same technologies and devices. Or that despite his riches, Bezos does not hold formal political power.

None of this is to deny there are social inequalities in society today. Still, to put them into a historical context shows what progress has been achieved – especially since we barely recognise it anymore.

The same can be said about political rights and political participation. For most of human history, the individual’s place in society was in a strict hierarchy, often determined by birth. The struggle for personal rights against such hierarchies, shaped by state and religion, is a constant theme over the centuries and millennia.

How could we appreciate the rights and freedoms we have today if we were unaware of these struggles? The British nobility demanded the Magna Carta from King John because it wanted basic legal protections. The American Revolutionaries fought freedom from the state’s intrusions. The suffragettes wanted voting rights for women.

And us? If we do not even remember these historic struggles, we are at risk of taking our liberties for granted.

International surveys of millennials and Gen Z’s (so everyone born since 1980) record a resurgence of sympathies for ‘socialism.’ ‘So what’ you might say.

However, the problem is that the same surveys then also reveal that many of these young people are unacquainted with the actual meaning of the term, let alone its historical expressions. These young ‘socialists’ know little of Marx and Engels, let alone of Lenin, Stalin and Mao. They would also be unfamiliar with the economic consequences of socialism and its totalitarian tendencies. They would probably not even know what totalitarianism means.

That kind of historical ignorance is widespread. It results directly from our failure to teach general history at school. The most basic ideas, events and people are unknown to many of our students.

Which brings us back to the proposed New Zealand history curriculum. For students unaware of world history, it will be difficult to make sense of developments that happened in this country.

In most other areas of enquiry, we proceed from the general to the special. We build up a generalist background knowledge before delving into detail. Why should it be any different with New Zealand history?

New Zealand students deserve a better understanding of history, including their own but not limited to it.

Should that stop us from trying?

New Zealand’s great education decline and the future of work