Wellington (Tuesday, 24 May 2022) – Respect for New Zealand’s commercial regulators has declined over the past four years, research by think tank The New Zealand Initiative reveals.

The study, conducted by the Initiative’s chair Roger Partridge, derives its findings from an in-depth survey of New Zealand’s top 200 companies. The new study follows up on the Initiative’s 2018 report, Who Guards the Guards? Regulatory Governance in New Zealand.

As in the 2018 study, companies were asked to both rate and rank the regulators they interact with, allowing a nuanced insight into the regulatory cultures across different agencies. In total, the survey tracked 23 key performance indicators for 24 regulatory agencies.

On average, only 29.9% of survey respondents agreed or strongly agreed that the Commerce Commission met the KPIs, while 38.5% disagreed. “This is a damning indictment of one of New Zealand’s most important regulatory agencies,” Mr Partridge said.

“Respect for regulatory agencies is critical,” said Mr Partridge. “Poor or unpredictable regulatory decision-making creates risk and uncertainty, stifling efficiency and innovation. Ultimately, this comes at a cost to consumers.”

The survey also identified concerns about the increasing politicisation of regulatory agencies, the lack of transparency and robustness in appointment processes for regulatory agency leadership, and deteriorating accountability.

The survey reaffirmed the link between how regulators are governed and how well they perform.  The separation of board and executive functions at regulators like the Financial Markets Authority contributes to greater accountability and to greater levels of expertise. The ‘commission model’ of the Commerce Commission fared worse.

“Our two studies leave no doubt that regulators need internal checks and balances to perform well,” said Mr Partridge. “A clear separation between the executive and the board, which is typical for corporate governance, should also become the norm for regulators.”

The Initiative’s findings are supported by the former chair of FMA, Murray Jack, who wrote the foreword to the report.

Further materials and infographic:
You can download Reassessing the regulators – The Good the Bad and the Commerce Commission here. The report is authored by Roger Partridge, with a foreword provided by Murray Jack, former FMA chair.

The infographic below summarises the ratings of New Zealand’s three top commercial regulators against a set of 23 key performance indicators. 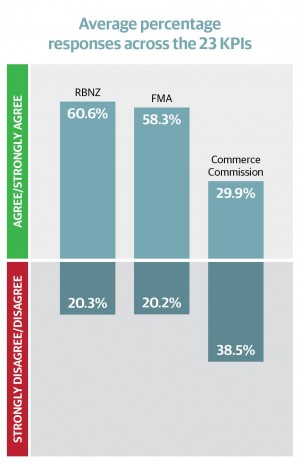 Reassessing the Regulators: The good, the bad and the Commerce Commission