When presenting Budget 2021 in May, Finance Minister Grant Robertson announced that an unemployment insurance (UI) scheme was being developed for New Zealand. Prior to this, the Productivity Commission had considered UI as part of its inquiry into technological change and the future of work, as had the Ministry of Business Innovation and Employment (MBIE).

Details of the envisaged scheme are still very limited. However, initial indications suggest the scheme might pay out as much as 80% of an individual’s previous wages if they were to become unemployed, subject to a cap.

Considering whether current policy settings support displaced workers adequately and exploring alternatives is understandable, given the economic turmoil that Covid-19 has unleashed worldwide. Early in the onset of the Covid-19 crisis, predictions of unemployment as high as 9% or more were not uncommon.

To help prevent that outcome from occurring, the government hastily implemented a wage subsidy scheme that arguably had the desired effect but was costly. Part of the thinking behind exploring the introduction of UI could be that compared to the wage subsidy scheme, UI might be better targeted and perhaps even less costly under certain conditions. The New Zealand Initiative proposed adopting a short-time work scheme for similar reasons.

However, even if correct, this does not mean that UI should be introduced in New Zealand. In fact, determining whether UI is a good fit for New Zealand is far from straightforward.

This paper considers some of the biggest costs and potential benefits of introducing UI to
New Zealand. Common features of UI schemes and how they differ across countries are also examined.

Because New Zealand’s labour market outcomes are generally good, delivering consistently low levels of unemployment and long-term unemployment, the potential benefits of UI appear modest at best. On the other hand, a significant body of empirical work suggests that UI insurance has a detrimental effect on employment. Total unemployment is raised, as is the length of time people spend in unemployment. UI also comes at a considerable fiscal cost. For these reasons, the introduction of UI in New Zealand should be avoided. 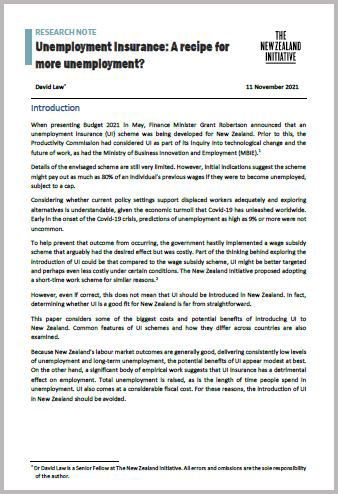 A Primer on Unemployment Insurance

A new way to insure? Parametic insurance pays out the agreed amount if the event happens