Reports & Media > Reports > Research Note: The rule of law or the law of rulers

Research Note: The rule of law or the law of rulers

Several legal scholars have raised concerns about the legality of the emergency powers during the Covid-19 crisis exercised by Government officials – specifically, the Director General of Health, Dr Ashley Bloomfield’s orders under the Health Act 1956 sending the country into lockdown on 25 March.

The courts will decide the lawfulness of Bloomfield’s actions now that they have been challenged by former Parliamentary Counsel (and legal textbook author) Andrew Borrowdale (the Borrowdale proceedings). Yet the Twittersphere is asking why any of this matters, with many statements like: “So Jacinda Ardern saved my life illegally. Like I should care.”

They should care. Questions about the lawfulness of government action raise a fundamental constitutional concept called the “rule of law.”

The rule of law forms a significant part of New Zealand’s unwritten constitution. Any power exercised by the Government must be based on legal authority. It means everyone is subject to the law: both the public and politicians alike.

In New Zealand, the term is typically used to contrast New Zealand’s Westminster-style democracy with the political system that allowed English kings to rule by royal prerogative (the divine right of kings). Leaving talk of kings aside, Kiwis should be concerned if the Government exercised its powers to fight Covid-19 unlawfully. First, if the Ardern Government acted unlawfully this sets a dangerous precedent. If one Government side-steps the law, what will stop the next one? And, unfortunately, the motives of future Governments might not be so benign. Continuing with the US President theme, President Barack Obama’s unprecedented use of executive orders paved the way for President Donald Trump to do likewise.

Were it not for Obama’s precedent, Trump may have felt more constrained in relying on executive orders to bypass Congress. A bad precedent paves the way for the abuse of power by others. The extraordinary nature of the powers exercised by the Government during the lockdown is also worrying. The Alert Level orders – particularly at Alert Level 4 – deprived all Kiwis of their most fundamental freedoms to visit friends and family (including those unwell or dying), to swim or surf at the beach and to perform paid work. These restrictions caused immeasurable hardship. While they also avoided great suffering, Kiwis should be able to rely on the Government to restrict their freedoms lawfully.

This report explains why even in emergencies, democratic governments must comply with the law. 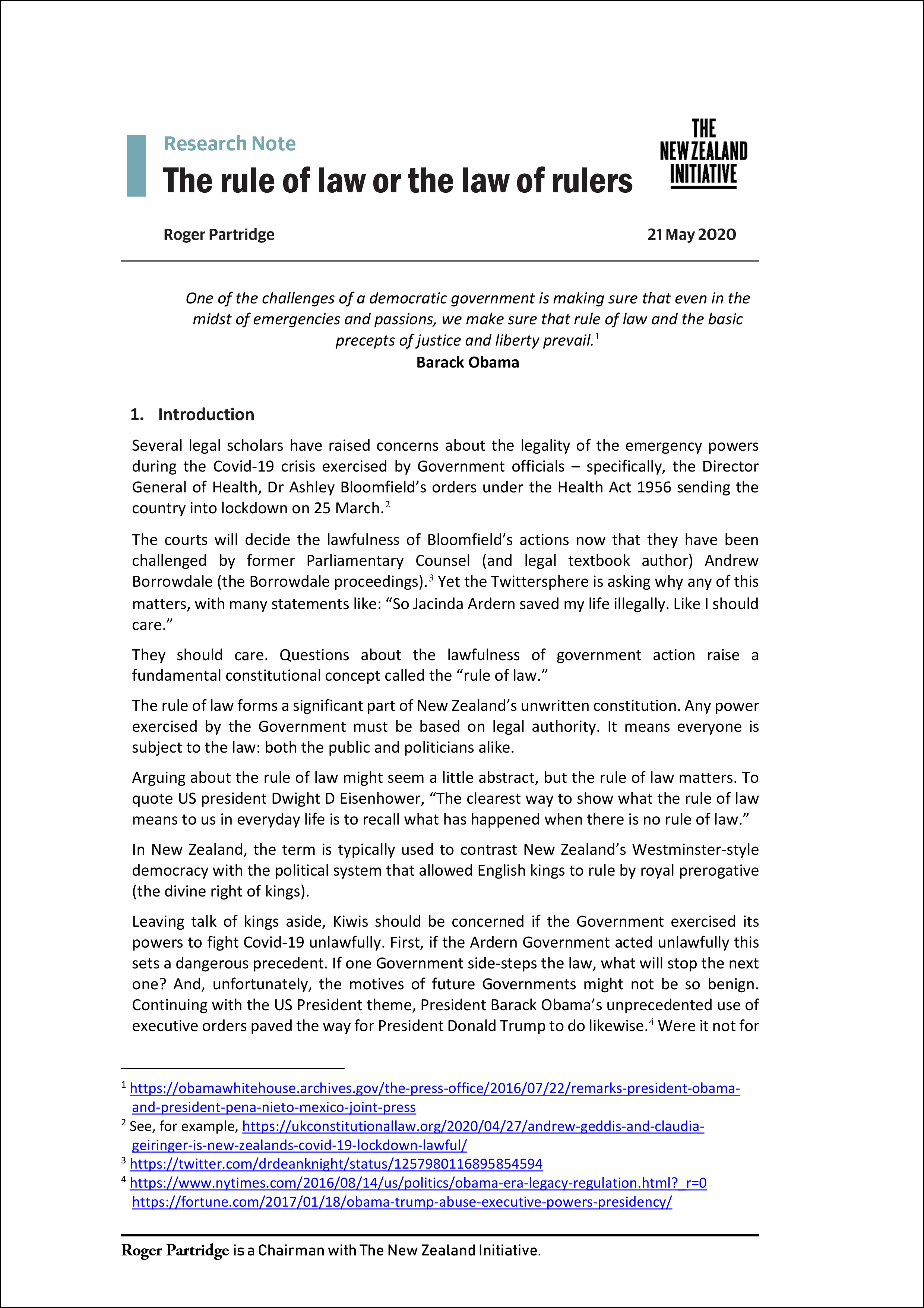