Pressure to intervene in the rental market is growing. The government’s new housing package, announced in March of this year, will increase rents and reduce the supply of rental accommodation to the detriment of many. Understandably, there is significant concern about this prospect.

Green Party MP Chloe Swarbrick recently suggested that rent controls should be considered to keep rents in check, and the Finance Minister is at this stage not ruling them out. In fact, in 2013 when vying for the Labour Party leadership he proposed introducing rent controls, noting that if elected leader he would introduce a private members bill to stabilise rents in Christchurch.

However, the introduction of rent controls would only exacerbate problems in the rental market and are a recurring policy mistake. This paper explains the reasons rent controls should be avoided, with reference to some recent empirical studies on their effects. The paper then outlines some of the previous policy choices that have been made with respect to housing, as well as their unintended but obvious consequences, that risk leading to the introduction of rent controls.

Rent controls come in various forms. They can cap the rent charged or, more commonly, rent increases during a tenancy. To be effective, they are usually paired with restrictions on eviction. 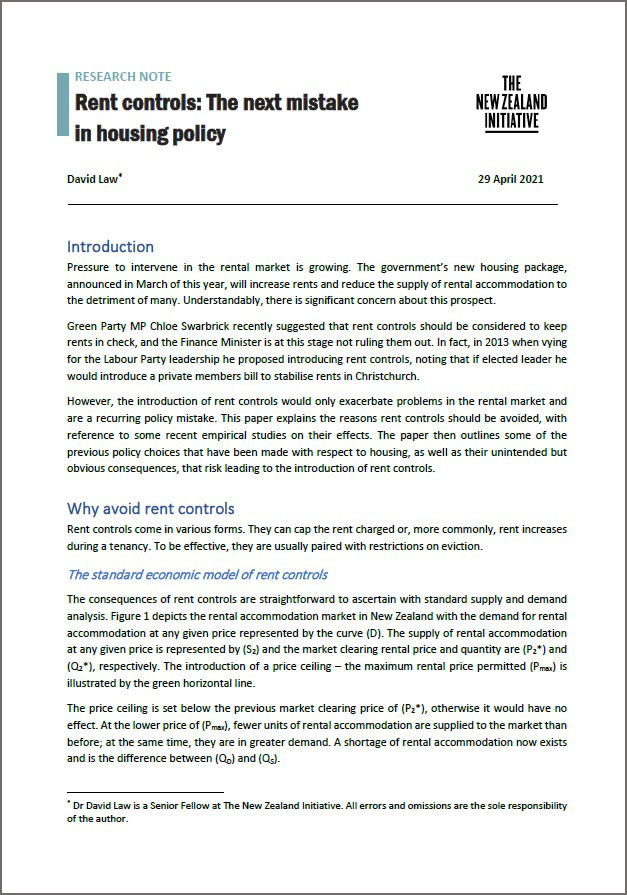 Podcast: David Law on the perils of rent controls

Media release: The perils of rent control in New Zealand

Podcast: Dr David Law on the housing package and what it will mean for the housing market and rental market