Research Note: The rising cost of living for Kiwis

Kiwis households are paying more than $3,000 extra on essentials than they were 12 months ago, and policies implemented by the Government and Reserve Bank are contributing to the problem.

The rising cost of living for Kiwis, shows New Zealand has the second-highest inflation rate among our major trading partners, besides the USA, and this is plausibly the result of excessive government stimulus.

New Zealand has the highest inflation in 30 years because too many dollars are chasing too few goods.

The Government has misdiagnosed the economic issues behind the pandemic. It has tried to solve a supply-side crisis with a demand-side solution.

The Government and Reserve Bank must learn from the economic mistakes of the Covid-19 pandemic, as New Zealand faces new supply-side issues as a result of the war in Ukraine.

Our report warns the Government is set to unleash further stimulus than could lead to inflation becoming etrenched.

The upcoming Budget includes an unprecedented $6 billion of new spending. This will only add more fuel to the fire, meaning more pressure on the cost of living.

We urge the Government to reconsider its spending commitments in light of New Zealand’s already high inflation rate and the terrible effects for households. 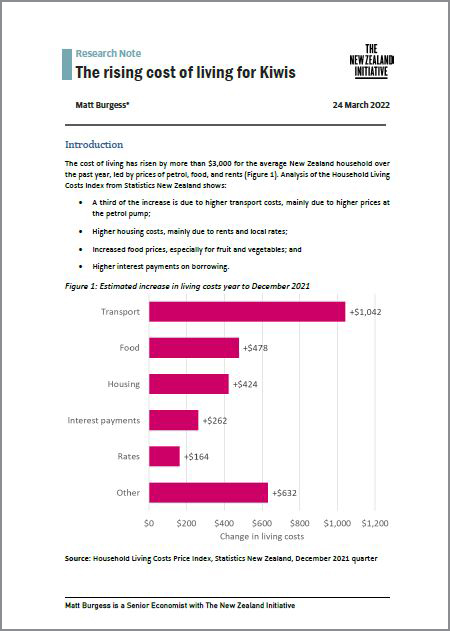 Podcast: The rising cost of living for Kiwis