Neither claim is true. Existing policies already have New Zealand firmly on track to deliver statutory emissions targets. Parliament has committed to reduce net emissions of greenhouse gases. Legislation defines net emissions as gross emissions (for example, from car exhausts) minus offsets (for example, the carbon captured by trees, co-operation with other countries). Offsets are recognised in domestic law and international agreements. They are affordable and available in effectively unlimited quantities.

These facts secure emissions targets. Regardless of how much or how little existing policies including the Emissions Trading Scheme (ETS) lower emissions, offsets will bridge the gap to targets. New Zealand is not in a position of having to resort to desperate measures to meet its climate change obligations. This country can make reasonable or best efforts to lower net emissions with existing policies and be certain
of success.

Accordingly, further policies are not necessary. We have options. The government could choose not to add thousands of dollars to the cost of imported vehicles from next month with its Feebate policy and be certain of delivering our obligations. Agriculture could stay outside the ETS indefinitely while the country reaches net zero emissions. Only by overlooking offsets can the government maintain the fiction that drastic further actions are necessary. The government bears the burden of proof to show how its new policies improve on existing policies.

Even if existing policies were not enough to reach targets, the government’s strategy would not help. The government has already capped greenhouse gases. Changes to the ETS in 2020 introduced a quantity cap. The new cap will be a sinking lid on emissions, set to fall in line with targets. It is well known that policies cannot reduce emissions from under an emissions cap. Cap-and-trade schemes like the ETS effectively neutralise other emissions policies. Where a policy lowers a sector’s emissions, the sector will buy fewer emissions permits. That leaves more permits for others, meaning higher emissions elsewhere. Overall emissions do not change. New Zealand has one of the most comprehensive ETSs in the world. Nearly all of the government’s policies will be neutralised – regardless of whether existing policies are enough.

The government’s vast new spending on climate change policies could reduce emissions by zero tonnes. If this were business, it would be fraud.

This report reviews the government’s climate change strategy. The strategy is based on a misunderstanding of the relationship between the ETS and other policies. The government is pushing its disruptive policies by misconstruing the legislation and by ignoring every feasible alternative. Officials have mostly abandoned cost-benefit analysis; they reject cost and effectiveness as primary goals; they believe climate policies should manage inequality and historic grievances as well as reduce emissions; emissions policies are rarely checked after they are launched; and poor performance is rarely corrected. It is not surprising that policies regularly spend 20 times more than the ETS to abate each tonne of emissions.

We are witnessing an historic public policy failure. Later this year, when the government delivers its new policies, it will call its policies “necessary” or “vital.” This is the pretence of necessity. It is cover for policies that could not survive any test of their merits. After all, there can be no case for expensive, ineffective, and often regressive policies if they are not needed. 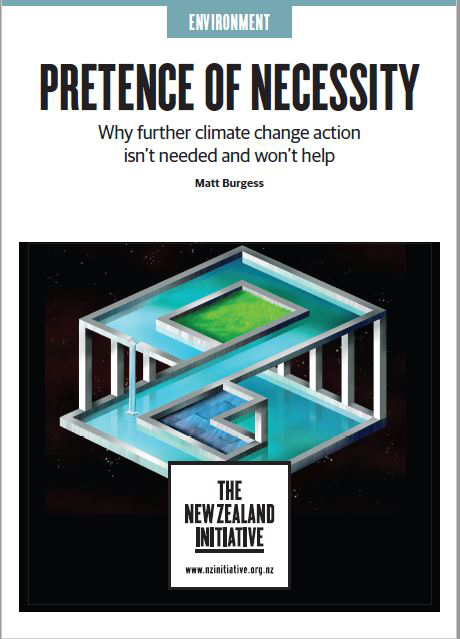 Submission: Transitioning to a low-emissions and climate-resilient future