MINISTERS OF THE CROWN, distinguished guests, ladies and gentlemen. It is my very pleasant duty to welcome you here this evening on behalf of the New Zealand Business Roundtable.

This is the third Sir Ronald Trotter lecture. The series was inaugurated in 1995 to recognise Sir Ron’s achievements in business and his many contributions to public affairs in New Zealand.

This year Sir Ron has reached the age of retirement from some of his board roles in New Zealand and Australia. He remains chairman of the board of the Museum of New Zealand Te Papa Tongarewa. We hope he will continue to play a role in public life for many years to come. We are delighted that Sir Ron and Lady Margaret Trotter have been able to join us this evening.

The purpose of the lecture series is to feature an outstanding international speaker on a major topic of public policy. Our speaker this evening is Norman Barry, professor of politics at the University of Buckingham in the United Kingdom. We are delighted to welcome Professor Barry to New Zealand.

Norman Barry is a political theorist with an interest in political economy and in the connections between politics, ethics and economics. He has eight books and dozens of articles to his credit.

In one of his books, The Morality of Business Enterprise, Professor Barry explores some themes that are very relevant to public debate in this country. One is the common belief that because business is founded on self-interest, it must lead to an indifference towards society at large and to a neglect of moral standards in the pursuit of profit. This belief often leads to proposals to impose regulations on business enterprises which go beyond those imposed on other sections of society.

More recently, Professor Barry has been writing on the topic of corporate social responsibility. Business is constantly asked to be ‘socially responsible’ and is criticised for its alleged individualism and the priority it gives to the interests of owners over those of some wider group of so-called ‘stakeholders’. These are important issues for New Zealand as we have moved from a highly regulated environment to one in which businesses are required to stand on their own feet and compete internationally. We are still some distance, I believe, from having a widespread understanding of the role of business and from developing a strong and instinctively understood business culture.

I believe Professor Barry’s lecture this evening will throw light on some of these important issues. His title is Business, Ethics and the Modern Economy. It is my very great pleasure to invite him to address us. 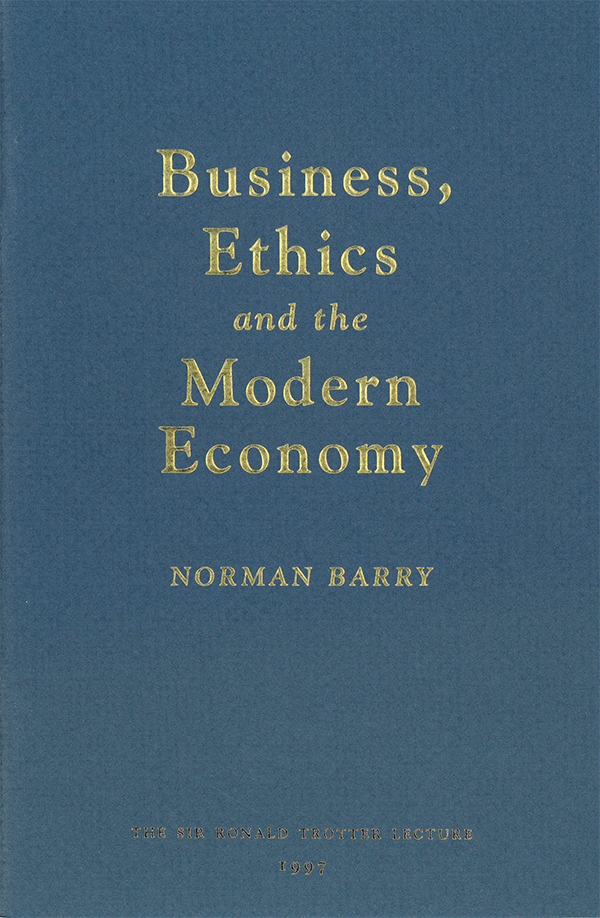