The blackout which affected thousands of North Island households two weeks ago was shocking in part because blackouts have become so rare.

Keeping the lights on requires an almost perfect balance of electricity supplied to and taken from the grid every second of every day. The fact that years can separate major outages is extraordinary.

Blackouts were once common in this country, peaking in the 1970s. Surprisingly, this was at a time of massive surplus generation potential, as the following chart shows. 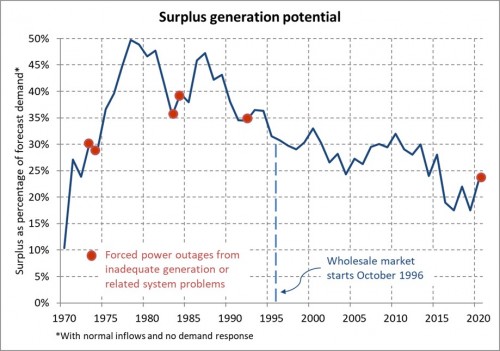 Electricity is a subtle and complicated game. Security of supply is about more than capacity. It is as much about the mix of generation which can keep the lights on under all foreseeable conditions while keeping electricity affordable.

New Zealand achieves this trifecta of affordable, green, reliable electricity without using subsidies – possibly the only country in the OECD to do so. Renewables compete on a level playing field with thermal generation – and win.

You would be hard pressed to know any of this from some of the commentary which followed the 9 August blackout. Several commentators even called for reforms in the wake of the outage. Such calls were not only premature but misguided.

To be sure, the blackout was a significant event. It affected 35,000 North Island households, about 1.7% of all households, for up to two hours on the coldest night of the year.

According to a report published last week by an author of this article, it was not a lack of generating capacity that caused the outage but a mistake by the system operator. Transpower sent incorrect information to lines companies, which led to consumers being completely shut-off.

The error compounded other problems on the evening of 9 August, which had left the system in a vulnerable state: limited gas supplies; an unexpected drop in wind generation; a hydro station near Turangi taken offline after a storm pushed weeds into it; and the highest electricity demand ever recorded.

Given the circumstances, it is remarkable that the lights might have stayed on but for the system operator’s mistake.

Nevertheless, the fact that the system reached a point where a single error led to outages for thousands of homes requires investigation. This is exactly what the Electricity Authority (EA), the market regulator, is now doing.

The blackout does not necessarily indicate any systemic problem. All electricity systems suffer outages because perfect reliability is too costly to achieve. Major outages occurred in the UK in 2019, most of Europe in 2006, and large parts of the United States and Ontario, Canada in 2003. The latter event lasted up to seven hours.

Any case for reforms must promise to deliver a better combination of affordability and security than the current system. Anyone can deliver security with an unlimited budget. The challenge is to achieve reliability for an affordable price.

New Zealand has done this better than almost anyone over the last quarter of a century. We have used competition to determine investment in electricity generation via the wholesale electricity market, which launched in 1996.

The idea is quite simple. Anybody can build a generation plant, connect it to a local distribution network or the national grid, and sell electricity. You can sell the energy from the solar panels on your roof, for example.

Generators can offer to sell their electricity for any price but must compete with other generators to be dispatched. The system divides each day into 48 trading periods lasting 30 minutes and only dispatches the most affordable generation offers each period. Costs for generation assets are recovered solely from the sale of the electricity they produce.

The Electricity Authority (EA) is the independent regulator. Its responsibilities cover everything from rule-setting to monitoring security of supply and anti-competitive behaviour. The EA is also responsible for investigating outages like the one on 9 August. The EA can make changes to market rules based on its findings.

Independence matters. In the 2000s, ministers directly participated in the rule-change process. But they made a hash of it, taking too long to approve rule changes and adopting rules that undermined investment. Ministers were taken out of the loop in 2010 when the EA was established.

The system has reached maturity after 25 years. Roles and responsibilities are clearly defined. When problems arise, solutions can be implemented from within. Everyone in the system understands repeated failures will encourage governments to intervene.

Calls for changes following the recent blackout have included the idea of “KiwiPower,” a government-owned and operated generator. KiwiPower would enter the market to compete with existing generators, like a Kiwibank for electricity.

It is difficult to see the merits of the KiwiPower idea.

Disrupted gas supplies from Taranaki and low lakes this year have led to high wholesale prices. This has delivered short-term profits to generators, and hit the bottom lines of major electricity users, some of them very hard. Their frustration is genuine and understandable.

But those high wholesale prices, a symptom of underlying scarcity, are helping to solve the problem by driving investment in new generating capacity.

Since the Tiwai smelter announced it was staying until 2024, many generation developments have been announced or confirmed by existing players. These include the Tauhara geothermal plant and wind farms at Harapaki, Turitea, Mt Cass and Kaiwaikawe, adding up to 718 MW and costing around $1.8 billion.

Solar seems to be about to take off in this country. Two new generation companies, Lodestar and Far North Solar Farms, recently announced plans to build large scale solar farms in the upper North Island. Genesis Energy also intends to build 500 MW of solar over the next five years.

Apart from investment, high wholesale prices have helped keep the lights on by providing early warning of energy scarcity coming into winter.

Gentailers responded to the elevated prices by offering more gas and diesel generation into the market at lower prices to conserve hydro. They also negotiated demand reductions with their commercial customers and secured more gas from Methanex.

The system is more competitive than most people realise. Pundits talk about the five large generators, but rarely mention the other 25 companies selling power to the wholesale market.

If there are excess profits to be had in electricity, anybody – existing players and new entrants alike – can grab them by building a generating asset, connecting it to the national grid, and selling its output. Those who complain about excess profits in electricity should explain why they are not investing in more generation themselves.

Some proponents of KiwiPower seem to want a generator that operates on non-commercial lines.

A non-commercial KiwiPower would be a formidable rival. Not because it is more efficient, but because it can operate on a cost-plus basis backed by the government.

But consider how other generators would react to KiwiPower. Consider whether investment by competing companies will still go ahead if KiwiPower threatens to make it impossible to earn a return.

There is a clear risk that KiwiPower could stifle other investments, leading to lower reliability and less affordable electricity in the longer-term.

We have been here before. After the dry year of 2003, the government arranged with Contact Energy to build and operate on the government’s behalf a KiwiPower diesel-fired generator at Whirinaki in Hawke’s Bay. The idea was to improve electricity security.

Whirinaki achieved the opposite result. The government promised never to run Whirinaki when wholesale electricity prices were below the cost of diesel. But it reneged on that promise in 2008, an election year. Whirinaki was run at a loss to suppress the wholesale price, with no regard for the long-term consequences of breaking their promise.

The government paid for the capital costs of Whirinaki through a levy rather than from selling power to the market like other generators, further eroding other investments needed to achieve security of supply.

In 2011, the Whirinaki plant was auctioned off for a $117 million loss. Taxpayers had lost 78% of their investment in only seven years in part because the plant was in the wrong place on the grid to regularly supply the market.

All of this serves to show how important it is to keep ministers out of generation investment decisions. Investment becomes politicised, divorced from market realities, increasing security risks by undermining other investors and ultimately raising costs.

KiwiPower is also promoted as a way to drive investment in low-emission sources of electricity, including wind and solar generation and battery storage.

But we already have investors lining up to build large scale wind and solar farms. Also, more than 30,000 households have already installed rooftop solar. The share of renewables could reach 95% by 2035 under existing policies.

There is no need for ministerial intervention in a system that is working.

Instead, the government should focus on reducing regulatory barriers to new generation, both on and offshore. The planning system adds years to the construction of renewable generation, especially wind. If the government wants more affordable, more secure electricity it could start by cutting some of the red tape.

As for the blackout two weeks ago, the EA must be allowed to complete its investigation and take the necessary steps. The Minister of Energy and Resources deserves credit for avoiding any knee-jerk reactions in the aftermath of the blackout. May that continue.

Carl Hansen is an independent consultant and former chief executive of the Electricity Authority. Since leaving the Authority, he has advised clients representing consumers, lines companies, generators and government.

Matt Burgess is Senior Economist at the New Zealand Initiative.

Podcast: The blackout on 9 August with Carl Hansen

The government’s response to blackouts