This report documents the 15-year history of the Numeracy Development Project (the Numeracy Project), a nationwide centrally devised approach for improving maths. The Numeracy Project existed officially as a professional development (PD) programme for teachers in most primary schools in New Zealand between 2000 and 2009. It put more emphasis on teaching children a range of strategies for solving maths problems, with greater emphasis on mental problem solving and less on written methods. Un(ac)countable investigates maths performance over the 15 year period that the NDP has been in place.

Children in the top-performing East Asian countries are not just rote learning for the tests. Un(ac)countable busts the myth that students in the top-performing countries do better simply because they regurgitate rote-learned knowledge for the tests. In the Trends in Mathematics and Science Study (TIMSS), students in the top-performing East Asian countries typically score higher on knowing (basic maths knowledge) than applying their knowledge and reasoning with it to solve novel problems (for instance, Singaporean Year Five students score 629, 602, and 588, in these domains, respectively). This suggests a relative strength in knowing the basic facts. New Zealand students show the opposite pattern, with higher scores in applying (490) and reasoning (490) than knowing (476). However, while New Zealand students’ relative strength is applying and reasoning, students in the East Asian countries outperform New Zealand students in all three domains. In other words, they have better knowledge of basic facts but they are also better at using their knowledge and strategies to solve novel problems. The same pattern of findings is evident for Year Nine students and for 15-year-olds in the PISA study.

It is this lack of emphasis on the basics in New Zealand that is holding children back from developing deeper mathematical understanding. New Zealand’s National Education Monitoring Project (NEMP), which ran from 1995 to 2010, did find improvements in elements of performance over time, but that these improvements were constrained by declines in components of tasks that “involved recall of facts or simple calculations”. TIMSS 2011 showed that New Zealand students spend much less time memorising basic facts and much more time explaining answers compared to students in the top five performing countries.

The pendulum has swung too far. While the basics (like times tables) are likely limited in use unless they are understood conceptually, they are still important because knowing the basics off by heart helps to free up working memory for children to learn more complex maths. And while the Ministry of Education maintains that both basic knowledge and strategies are important, their messaging has been inconsistent. The Ministry’s maths website states, for example, that teachers should debate whether to use the written method at all. It is difficult to know if the Numeracy Project was the mirror or maker of anti rote-learning attitudes. Our analysis of the language of New Zealand curriculum documents suggests there was a pendulum swing towards strategies and away from knowledge. And as above, our report shows that children are not spending enough time memorising the basics.

The new methods may rely too much on teachers themselves having a deep conceptual understanding of mathematics. Researcher Jenny Young-Loveridge found low levels of maths competency with 125 new primary school teachers in 2010. One-third could not correctly add two fractions together (7/18 + 1/9) (the most common mistake was adding the numerators together and the denominators together).

Yet maths is a subject where teacher knowledge of the subject is important for student learning (as is knowing how to represent mathematical concepts in ways that children can understand). However, aside from the University of Otago, none of the providers of Initial Teacher Education (ITE) require students to meet a certain level of maths proficiency in order to graduate.

Although teachers may struggle with maths, they are probably not worse than 15 years ago. Young-Loveridge’s research suggests that while primary school teachers in general seem to struggle with maths, this is unlikely to have changed in the last 15 years. Un(ac)countable shows that teacher pay relative to other professions like engineering, accountancy and law has remained consistent over that time. Although pay is not everything, it will influence career decisions for those with maths skills. This suggests that declines in maths performance are not likely linked to declining teacher maths abilities.

New Zealand teachers get a lot of training in maths, but we know little about the quality of that training. In New Zealand, around 10-20 per cent of degree points are maths related, depending on the ITE provider. Only two of the other 49 countries in TIMSS 2011 had more professional development (PD) in maths for teachers. The generally low level of teacher proficiency in maths is therefore unlikely to be due to the quantity of PD. However, we know nothing about the quality of the PD. The lesson from the Numeracy Project is that top down change is inappropriate in the New Zealand context. Un(ac)countable analyses the failures of the Numeracy Project in the context of a centrally designed system laid over the top of a self-managing school system. Some key points are that:

Solutions for discussion. Each of New Zealand’s 1,900 primary schools will be at different stages with their maths programmes (many would have already started putting more emphasis back on basics) so a central approach for improving maths is not appropriate. The report is intended to raise discussion with schools about the importance of the basics, and to put forward some ideas for solutions for discussion and debate. 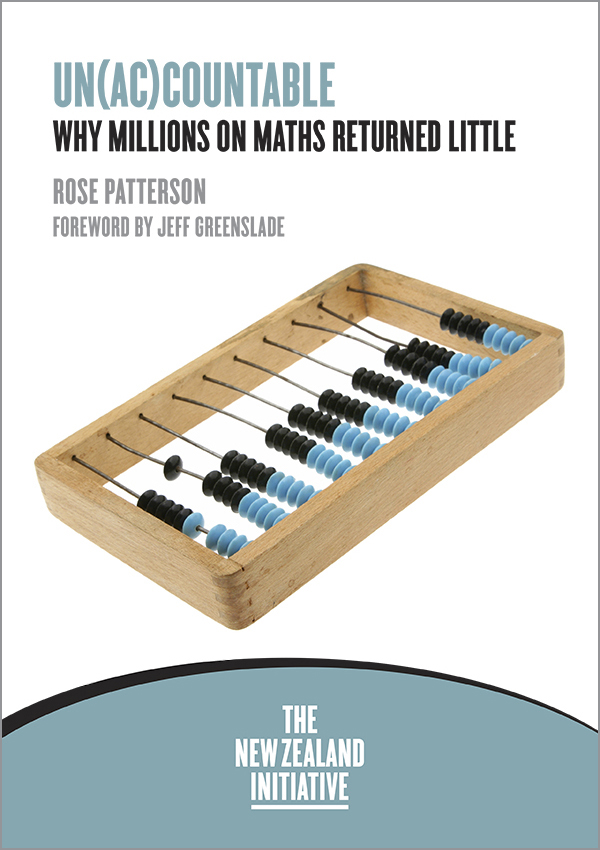 Dr Oliver Hartwich on Radio NZ on maths in schools

Why millions on maths didn't add up

Rose Patterson on Un(ac)countable: Why millions on maths returned little

ONE News - Maths teaching proves too confusing for Kiwi kids