The Covid-19 pandemic and economic lockdown means many countries are looking inwards. But global cooperation will be an important lever out of the economic and social consequences of the virus. The New Zealand government should embrace the opportunity to reinforce its image as a clean, open and lawful nation.

The International Monetary Fund (IMF) has warned of the likelihood of the deepest economic downturn in nearly 100 years partly due to lockdowns across the world and also forecasted a decline in the volume of world trade in excess of 10%. The World Trade Organisation (WTO) has even worse projections.

The coronavirus outbreak has exposed the vulnerability of international supply chains. Insufficient stockpiles of personal protective equipment (PPE) in most countries have already caused plenty of low-level political friction which threaten to resurrect harsh trade barriers. The New York Times said some 69 countries have already imposed protectionist measures prohibiting the export of PPE and other goods.

Various types of lockdown protocols in different countries quickly changed consumer habits and sent ripples back up supply chains. While orders are still coming through, many producers in New Zealand face an extended period of recalibration in both their revenue forecasts and employment.

The crisis also revealed a dearth of international cooperation to help fix what is fundamentally an international problem. None of the expected bodies were able to take the lead to regulate or coordinate a global pandemic response which may mean that international institutions have simply stopped working. Eventually, countries may again realise that cooperation is important and New Zealand should be at the forefront encouraging this.

However, some New Zealand politicians, trade experts and economists have suggested New Zealand take the crisis as a warning sign that overreliance on free trade with China and other countries makes Kiwi businesses more vulnerable to shocks.

Yet New Zealand’s hard-won and deep free trade agreements (FTA) with an open world trading system will be a key factor in resolving the coming economic downturn, along with its close ties to East Asia’s largest market economies of China and Japan.

New Zealand should not retreat into outmoded interventionist responses. The Government’s best long-term bet is to support, not undermine, the liberal open trading system and continue with domestic policy measures consistent with that. 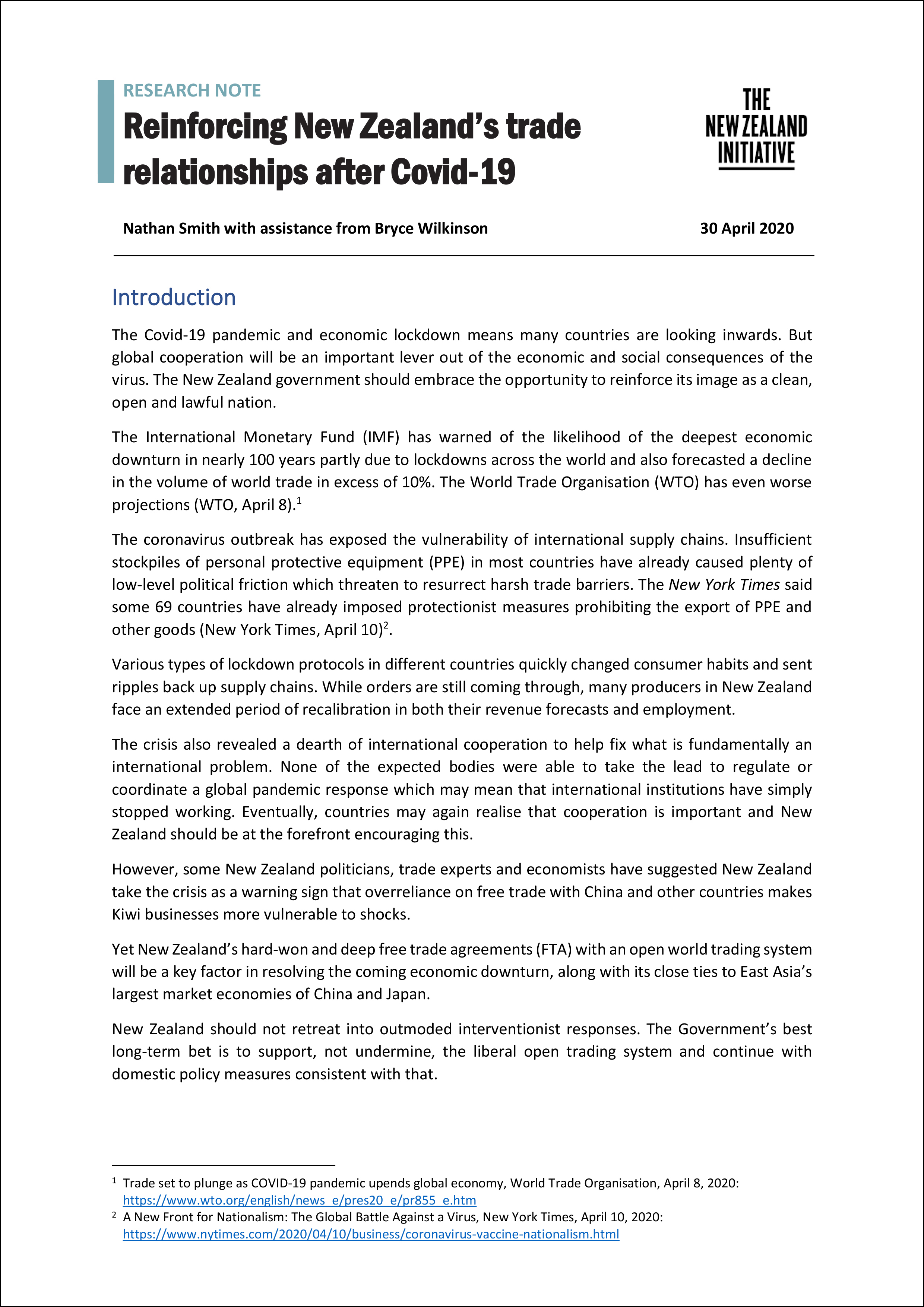 Research Note: Deficit spending in a crisis: why there is no such thing as a free lunch