Looking through the road user subsidy: an inflation primer

On Sunday, the government announced an extension of the petrol excise and Road User Charge holiday, as well as half-price public transport, until the end of the year.

The Beehive’s press release said that the move would reduce headline inflation by 0.5 percentage points.

Headline inflation was announced at 7.3 percent the next day. The last time inflation was that high was June quarter of 1990, when inflation hit 7.6 percent, making this quarter’s result a 32-year high.

Consequently, we should look through the effects of the policy when looking at headline inflation. And if we do, then you need to look back 34 years, to March quarter 1988, to find a higher inflation figure.

But was the move inflationary?

The Consumer Price Index would certainly be higher than it otherwise would have been. For one year.

So unless something else changed, the GST increase would not affect ongoing inflation.

The Reserve Bank worried about whether that ‘something else’ might matter.

Monetary Policy Statements in 2010 talked about the potential for the CPI increases to pass through into wage increases, which could affect ongoing inflation figures. At the same time, energy began facing a carbon price in the ETS, which would also affect headline CPI. And a sequence of hefty tobacco excise increases began.

So RBNZ checked with industry to see whether those CPI increases were feeding into wage settlements, and they checked against surveys of inflation expectations. They also looked at what happened in the last GST increase.

They saw little cause for concern, noting that “monetary policy would act to offset any pick-up in medium-term inflation expectations.”

The December 2010 Monetary Policy Statement provided measures of both CPI and projected future CPI. One forecast included the effects of policy changes that affected CPI; a second stripped out those effects. 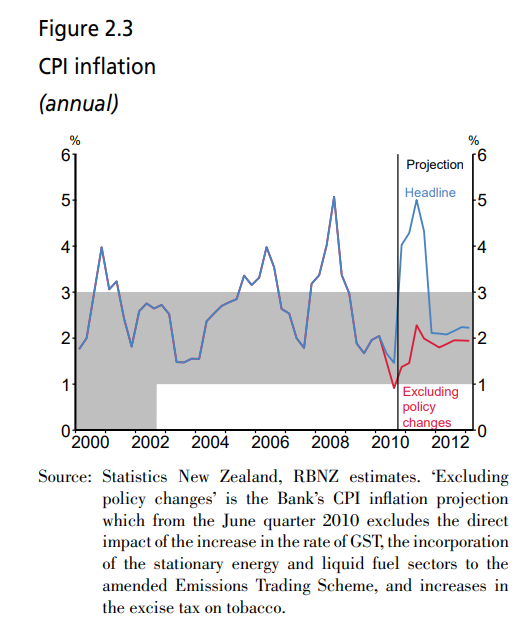 Monetary policy focused on keeping inflation between one and three percent over the medium term has to look through transitory shocks like a GST increase or a fuel excise holiday.

Whether the Reserve Bank still cares about inflation targeting and returning to the midpoint of the target band is more questionable than it really should be.

The Reserve Bank’s survey of 2-year-out inflation expectations, as of June 2022, was 3.29%: above the top of the target band and higher than it has been since March 1991, when inflation targeting was in its infancy and the Bank was working to establish credibility rather than erode it.

The Bank then faces a headline inflation rate of around 7.8 percent: higher than it has been for 34 years, 4.8 percentage points above the top of the target band, and substantially above the 7.0 percent that the Bank had forecast as a June quarter result in its May Monetary Policy Statement which took no account of the petrol excise holiday or its effects.

On the flipside, if the temporary but twice-extended petrol excise holiday ever does end, the Bank should look through the artificial increase in headline inflation when 2022 CPI figures, incorporating a fuel discount, are compared with 2023 CPI figures.

The government’s moves to reduce transport costs will temporarily affect the cost of living but do not address inflation. Changes to transport charges represent a change in relative prices and in who pays the bills, rather than a change in the value of money relative to goods and services.

When global fuel supplies are tight, some of the benefits of the excise reduction will flow through to fuel companies rather than consumers.

The policy shifts the cost of using the roads from road users, who paid for road use through their excise and RUC payments or through public transit fares, to the tax base more generally. Minister Robertson announced that extending the excise and RUC reductions will cost over half a billion dollars.

Unspent Covid funds that could have brought critical medical staff into the country will instead provide a continued discount for the use of the roads.

It is also no way to fight inflation.